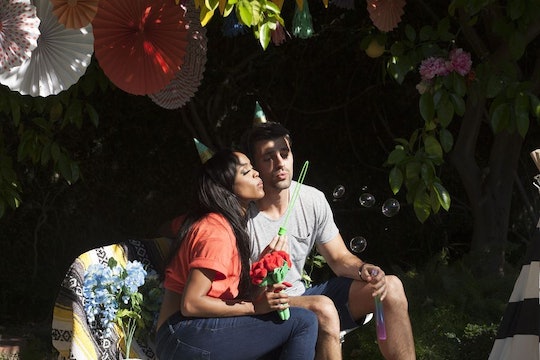 These Photos Of Copper Are Too Cute For Words

Even if Rachel ends up with someone who doesn’t last on this season of The Bachelorette, she’ll always have her dog Copper. And if Week 2 has taught us anything, it’s that Copper is more than enough as far as love and companionship go. Of course, the endgame is for her to end up with a human man, but he has to be able to win over her dog first and the photos of Copper from The Bachelorette prove that Rachel’s pup is too cute to not immediately love.

As it stands, fans all over social media are already obsessed with him and the season is just beginning. According to Rachel’s Instagram, Copper is a two-year-old rescue dog and the only photo she posted of him was back in January. But even if he’s still relatively new in her life, dog and owner relationships are about more than placing a bowl of food in front of them and letting them have at it. Instead, Rachel calls Copper her "dog-child" and best friend, so naturally some of the men will have to pass a Copper test as the season goes on before they even think of winning over her heart.

Peter seems to have already won over the pup and vice-versa, as seen in his and Rachel's first ever one-one-one (a.k.a. two-on-one if you count Copper, which you probably should). But the photos of Copper make it hard to do anything but want to love up on the fluffy fur baby.

Copper first appeared on the Season 13 premiere when Rachel arrived at her Bachelorette suite and then he popped in again after showing up to her and Peter’s date. And just like that — Twitter wanted more because he’s Copper and he’s amazing.

On Peter and Rachel’s date, the Finnish Spitz and German Shepherd mix dog was in doggy heaven at BarkFest, where he lounged in baby pools and spent the afternoon being pampered at the backyard canine festival. He also proved that he’s probably one of the most laid back dogs ever, making you want to cuddle with him all day long.

Since Rachel has Copper staying with her instead of just visiting, he’s likely going to keep showing up throughout this season, but who’s complaining?

In the past on The Bachelor or The Bachelorette, the man or woman looking for love might have a friend or past contestant pop up to give them advice. While that’s still entirely possible to happen this season beyond what we saw in the premiere, it also looks like Copper might do well to fill that role all on his own.

But again, no one is really complaining, since fans on Twitter have already joked about wanting a doggy Bachelor spinoff or at least a spoof skit with Copper as the Bachelor himself. It’s definitely the general consensus that viewers hope Copper will be able to stick around throughout the rest of Rachel's journey.