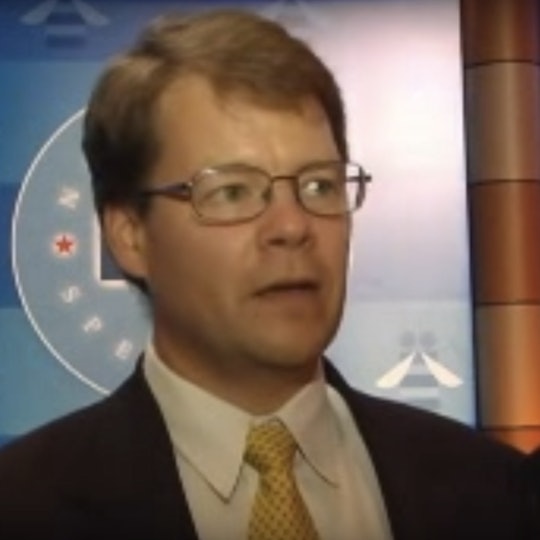 Photos Of Jacques A. Bailly's 1980 Spelling Bee Win Show Just How Pumped He Was

Think you can you spell elucubrate? Do you know what it means? Not even my computer can spell elucubrate (it keeps getting highlighted by spell check), and computers can do anything. The word is a verb, and it means to produce work, literary work in particular, by long, intensive effort. Which means it was the perfect winning word for a spelling bee, right? Elucubrate was the winning word for a then-14-year-old Jacques A. Bailly, and pictures from Bailly's 1980 spelling bee win show how relieved he truly was to see the end of the long battle.

When Dr. Bailly won the Scripps National Spelling Bee in 1980, he was competing against 100 other students over two days of non-stop spelling. So it comes as no major surprise that he told TIME magazine in a recent interview that his first reaction when he won was simple relief. He was ready for the competition to be over. Although I guess one could argue that it's still not technically over for Bailly. He has been the pronouncer for the Scripps Spelling Bee since 2003, encouraging young teens from across America to spell, to compete, and to value education on a national platform that Bailly feels is "as American as apple pie."

Bailly went on to study Ancient Greek and Latin (maybe as the result of his spelling bee win with the Latin word elucubrate?), and earned a Ph.D. from Cornell University. Besides being the chief pronouncer for the Scripps National Spelling Bee since 2003, he is also a full time professor of classics at the University of Vermont. He has made a name for himself as being approachable and encouraging to the kids, possibly because he remembers the enormous pressure of spelling on a national stage.

This year, there are a record number of contestants, and when TIME asked Bailly why he thought the Spelling Bee remained so popular, he had this to say;

It has this sort of all-American cachet. It's kind of like baseball and apple pie. It's also something that anybody can try, sort of like playing Scrabble — it's easy to get the hang of. And these kids are right at an age where they're like adults, but they're not adults, and they don't have a game face, so it's fun to watch them. You can read the storms, watch the sun come out — you can see all that on their faces when they get a word.

Since Bailly has been part of the spelling bee for the better part of 30 years, and as a winner himself, he certainly seems to fit the role of expert.