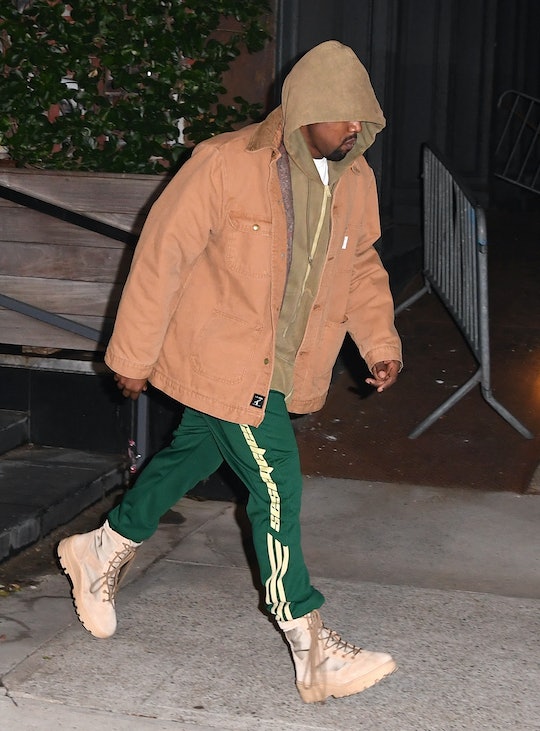 On Thursday, rapper Kanye West made his first public appearance since his brief hospitalization in November, attending an art exhibit in Los Angeles. Fans quickly noticed something distinctly different about the Life of Pablo star: West was seen sporting a new hairstyle. Photos of Kanye West's new hair show that he decided to try out a blonde look.

The rapper's new style was reportedly revealed by artist Giovanni Bassan on Thursday, who posted a picture of West on Instagram. The shot was captioned, "K s in da house," according to Us Weekly, and showed West sitting down, hands clasped. The artist also took another snap of West, who appeared to be checking out a piece of art at the the Rick Owens "Furniture" exhibit at the the Museum of Contemporary Art. In the two pictures, viewers can see West's new look: it appears the rapper opted to have the sides of his head closely cropped, with the top dyed blonde.

According to Entertainment Tonight, West has been laying relatively low ever since his hospitalization at the UCLA Medical Center on Nov. 21. He hasn't appeared on Keeping Up with the Kardashians since he was admitted, and the Kardashians have all remained (understandably) quiet about his condition and private life. West's wife, Kim Kardashian, has also been keeping away from social media and the public eye ever since she was robbed at gunpoint in Paris in early October.

There have been conflicting reports as to where West and Kardashian have been living since West was released from the UCLA Medical Center. According to Us Weekly, Kardashian has been staying with her mother, Kris Jenner, as West continues his recovery. A source reportedly told the magazine, "Kanye has not seen the kids very much since he was released, and Kim does not think he should. She has no plans for them to all live together." However, another source told Entertainment Tonight that Kardashian and West were living together and far from splitting ways.

Romper reached out to West's representatives, but did not hear back immediately. The most important thing, though, is that West is reportedly continuing to receive outpatient treatment and taking the time to rest and recover. The fact that he's out and about among friends also seems like good news. As for switching up his hair color? It looks like West is mixing it up and playing with his look, which is nothing new for the stylish "Fade" star.