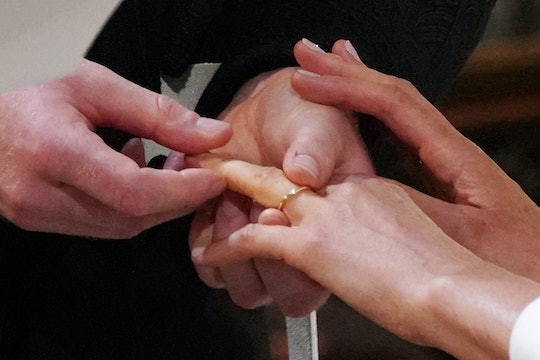 Photos Of Meghan Markle's Wedding Ring Are Here, & It's Filled With History

Considering how gorgeous her engagement ring is, expectations were high Saturday as fans awaited a glimpse of Meghan Markle's wedding ring. During the royal wedding, photographers made sure to take a quick break from photographing Markle's gorgeous wedding gown to zoom in on her left hand. And now that photos of the small piece of jewelry have begun to flood the internet, fans are free to gawk at, analyze, and envy photos of Meghan Markle's wedding ring.

When the Duke and Duchess of Sussex exchanged their vows Saturday morning, Markle's engagement ring was nowhere to be seen. So when Prince Harry put the simple gold wedding band on her left hand, viewers were able to get a clear look at it. Like her engagement ring (which, not to worry, was back on her hand by the time the couple appeared outside on the chapel's steps), Markle's wedding band is yellow gold — which is no surprise, for a number of reasons.

Firstly, Markle's yellow gold is Markle's favorite (more on that in a moment). But more importantly, the past few generations of royal brides have worn wedding bands made from the same piece of Clogau St David’s gold from Bontddu, North Wales, reported Marie Claire. The Queen Mother (Queen Elizabeth II's mom) began the tradition at her 1923 nuptials, and the same piece of gold was used to make wedding bands for the Queen, Princess Margaret, Princess Anne, and Princess Diana.

All those weddings caused the gold nugget to become smaller, so the British Royal Legion gave Queen Elizabeth a second piece of Welsh gold sometime in the 1980s, reported LoveToKnow. The gold was used to make wedding bands for The Duchess of York, the Earl and Countess of Wessex, Charles, Prince of Wales and Camilla, the Duchess of Cornwall, and Kate Middleton, Duchess of Cambridge. It's confirmed that Markle's wedding band was made from Welsh gold, and that it was a gift to her from Queen Elizabeth II, reported People. However, it's unclear if Markle's wedding band was made from the same piece of gold that Middleton's was.

Not to mention, Markle's engagement ring was filled with symbolism, and the couple shared the ring's details in their post-engagement interview. Prince Harry designed the ring along with jewelers Cleave and Company, reported The Telegraph. Harry sourced the center diamond from Botswana, where the couple spent a lot of time together. The two surrounding diamonds came from the collection of his late mother, Diana, Princess of Wales. The three stones came together on a yellow-gold band, which Prince Harry conveniently knew was Markle's favorite.

"It’s obviously yellow gold because that’s [Meghan’s] favorite,” Harry revealed in the interview, reported The Telegraph, adding that the two surrounding diamonds, "are from my mother’s jewellery collection to make sure that she’s with us on this crazy journey together."

Markle seemed in love with the engagement ring — especially with the way it honored Princess Diana. She said in the interview, according to The Telegraph:

It’s beautiful... Obviously not being able to meet his mom...it’s important to me to know that she’s a part of this with us. It’s incredibly special. And to be able to have this [ring] which links where [Harry] comes from and Botswana which is important to us - it’s perfect.

It's no surprise that Markle loved the thoughtful engagement ring Harry gave her back in November, and it's clear that she also loves her engagement band. And not only because Harry presented it to her on their royal wedding day, but also because it was a gift from the Queen, and filled with history.