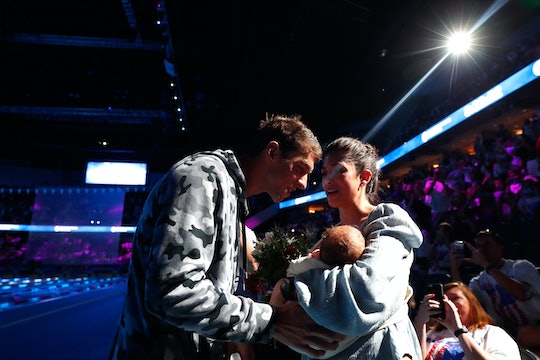 U.S. Olympic swimmer Michael Phelps is in Rio de Janeiro, Brazil, with the rest of Team USA, competing at this year's Summer Olympics to bring home even more gold medals to add to his already heaping pile of 24-karat accomplishments. With him are his parents, Debbie and Michael Phelps, from Baltimore, Maryland, and his 31-year-old fiancée, Nicole Johnson. Adorably, she's also brought their 3-month-old son Boomer to Rio as well, cheering his daddy on bedecked in a patriotic red, white, and blue baby carrier that bears his father's initials "MP." Photos of Michael Phelps and Nicole Johnson — from both their time in Rio so far and from earlier in their relationship — show the world they are one ridiculously cute and fun-loving couple.

Not only that, but photos of Phelps and Johnson show that they are both clearly proud, beaming parents — and, amazingly, able to deftly navigate that parenting hazing period known as the newborn months all while Phelps maintains his complex, demanding training regimen for the Olympics and other elite-level swimming competitions. Johnson has been in the stands with her soon-to-be in-laws every day that her fiancé has been in the water, and was there too when Phelps lead his team to win the gold medal in the men's 4-by-100-meter freestyle relay on Sunday. Here's a look at six photos of Phelps and Johnson that show just committed they are to one another.