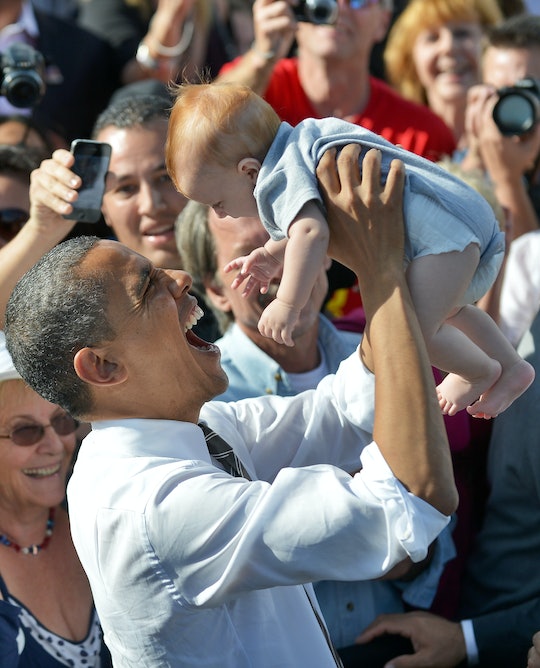 We’ve been preparing this moment for months — perhaps even years for some —but when Chief White House photographer Pete Souza started sharing his favorite shots of President Barack Obama on social media this weekend, the reality that he'll be leaving the Oval Office in just a few short weeks quickly began to sink in. Many of this year's photos involve the president interacting with adorable little ones and these photos of Obama and kids will bring you to tears, either from utter cuteness or because we're all sad to see him go. While Obama will be remembered for countless things, one thing that has resonated with many is his compassion for children and the impact he has had on them over the past eight years.

These photos will long be ingrained in our memories, whether it be the time when Obama couldn't handle how cute that kid was in his Pope Halloween costume, or when he let a little boy touch his hair to see if it felt the same, or even when the president laid on the floor to hold an adorable baby dressed as an elephant over his head. These photos have been so captivating that the popular hashtag #ObamaAndKids began trending again on Friday after it first originated back in February.

The same picture that got #ObamaAndKids started months ago was shared again in Souza's annual collection of his favorite photos of Obama's presidency. Here's the memorable photo of the president greeting a little boy named Clark Reynolds  at the White House during African American History Month.

Whichever heartwarming moment you remember most from Obama's eight years in the White House, it's a safe guess that these photos will make you happy cry. So, without further ado, here are the best photos of #ObamaAndKids:

When Obama Met The Cutest Pope

Here's a video of the adorable meeting:

When Obama Taught Superman How To Flex

And The Time When He Was Defeated By Another Superhero

When This Kid Threw A Tantrum In The White House

When This Adorable Elephant Brought Obama To The Floor

When Obama Had This Very Serious Lunch Meeting

When Obama Let This Curious Kid Touch His Hair

When This Future Doctor Listened To The President's Heartbeat

When He Did The Right Thing With This Golden Opportunity

Finally, When Obama Couldn't Get Enough Of This Smiling Baby On The Fourth Of July

This collection of photos has got to be the most adorable way to remember Obama as he concludes the last few weeks of his presidency. And although we've learned a bunch and accomplished a lot over the last eight years, one of the most lasting impressions many will long remember is that an adorable youngster has the ability to stop the 44th president in his tracks, serving as a reminder that politics isn't all awful.