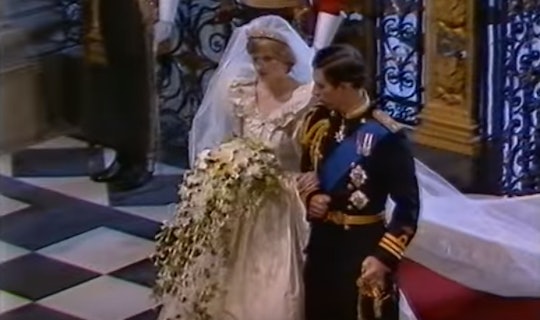 Photos Of Prince Charles & Princess Diana's Wedding Are Too Sweet

Eventually she would become one of the most beloved, tragic, famous women of our time. She would become the mother of two sons, would suffer through a scandal felt all around the world, would have her heart broken and fall in love again. But on her wedding day in 1981, she was a young girl marrying a future king. And now, as her youngest son is preparing to marry later this month, these photos of Prince Charles and Princess Diana's wedding might make you choke up a little as I did. For so many reasons, not the least of which because Princess Diana didn't live to see her son on his big day.

Lady Diana Spencer married His Royal Highness Prince Charles, heir to the British monarchy, on July 29, 1981 at St. Paul's Cathedral. The wedding was broadcast on television around the world and was reportedly watched by 750 million people (including me and my Nana). The wedding was full of pomp and circumstance and, of course, some ancient traditions. Many of the traditions are quite lovely; for instance, the tradition of brides wearing white on their wedding day was actually started by Queen Victoria herself. And a royal bride, including Princess Diana, always carries a sprig of myrtle in her bouquet because it's considered an "herb of love." But here's one of the best ones; the royal family travels to the church in an actual glass coach, like the one that carried Princess Diana and her father, Earl Spencer, from Clarence House to St. Paul's Cathedral.

When Princess Diana and Prince Charles left the cathedral together they traveled by yet another horse-drawn carriage. Sure, it was no teeny-tiny glass coach, but it was still might impressive.

Princess Diana and Prince Charles had more than 3,500 people present for their ceremony in St. Paul's Cathedral, and theirs was the first royal wedding to happen at this location since Prince Arthur married Princess Catherine 480 years earlier in 1501. Royal heads of Europe were on hand to watch the ceremony, as were Queen Elizabeth and Prince Phillip, the Queen Mother, and more. Regardless of how many famous people were in the crowd, however, one person kept the eyes of the nation firmly on her. A "commoner," Lady Diana Spencer. She wore a dress designed by David and Elizabeth Emmanuel for Alexander McQueen that was covered in 10,000 pearls and had a 25-foot train, the longest in royal history. She paired this with an 18th-century tiara, silk shoes covered in hundreds of sequins and pearls, as one does.

But here is what made Princess Diana so unique; she flubbed Prince Charles' name during their vows (she called him by Phillip Charles when he's actually Charles Phillip), and barely batted an eyelash. She also managed to carry her youngest bridesmaid, 5-year-old Clementine Hambro, despite the massive size of her dress or the imposing figure of the actual Queen of England walking through Buckingham Palace at her side.

No wonder Prince Charles looked pretty happy to be planting a kiss on her on the balcony in front of 500,000 people after their wedding.

Of course, we all know how things ended with Princess Diana and Prince Charles. The couple divorced in 1996, just over a decade after their marriage, and Princess Diana rather famously struggled publicly with her relationship with the royal family until her untimely death in a car accident in 1997. So it's sort of lovely to see everyone smiling together all those years ago, despite the future complications.

As the world prepares for the wedding of Meghan Markle to Prince Harry, the youngest son of Diana and Charles, it feels important to look back at the wedding of his parents. Even if it's a little heartbreaking to think of all that she's missing, and all that should have been.