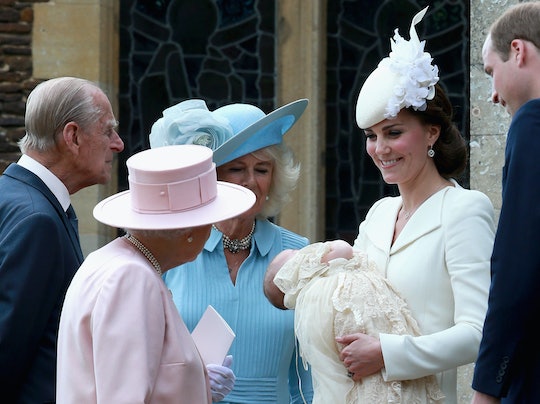 It's truly difficult to believe that Prince Louis, the third and youngest child of the Duke and Duchess of Cambridge, is nearly three months old. And about to have his official christening to boot. Why, it's enough to make a girl want to take a trip down memory lane with photos of Princess Charlotte's christening. You know, just to keep myself busy until the next royal christening happens.

Prince Louis, who was born on April 23, is set to be baptized on July 9 at 4 in the afternoon, according to a statement released by Kensington Palace, which read ""The Duke and Duchess of Cambridge are pleased to announce that the christening of Prince Louis will take place on Monday 9th July at The Chapel Royal, St James's Palace, London. Prince Louis will be christened by The Archbishop of Canterbury, the Most Reverend Justin Welby." The Chapel Royal is the same place where Prince Louis' older brother, 4-year-old Prince George's christening took place when he was three months old, according to Hello. Princess Charlotte was also christened when she was three months old, but hers took place at Sandringham in Norfolk, as Hello reported.

And while it's difficult to get a good look at Princess Charlotte from that day on July 5, 2015... it should be enough to tide you over until we can clap our eyes on Prince Louis once again.

Still, there were a few pretty sweet close-ups of the tiny princess.

Also in attendance at Princess Charlotte's christening were Prince William's father, Prince Charles and his wife, the Duchess of Cornwall. Oh yes, and his grandparents, Queen Elizabeth and Prince Phillip.

Unfortunately Prince Harry missed his niece' christening because he had already committed to doing conservation work in southern Africa, according to The Telegraph. Now that he's a married man himself, hopefully we will see him and his wife, Meghan Markle, at Prince Louis' christening next month. The Duchess of Sussex definitely seems like someone who would want to go to her new nephew's christening. Especially if it means a chance to wear another gorgeous fascinator, perhaps.

Of course, Princess Charlotte's own older brother was at the christening, and now let me treat you to some pictures of Prince George in little red shorts and a blouse.

Even the Queen herself couldn't help but be charmed by Prince George.

The Duke and Duchess of Cambridge looked incredibly proud to be christening their baby girl in Norfolk, and naturally looked pretty damn charming themselves.

When it comes time for Prince Louis' own christening, royal watchers are getting antsy to see the next big event. After all, the public has only had a few glimpses of the new baby since his birth. When he was in his mother's arms just seven hours after being born, and in a few portraits the Duchess of Cambridge took of him when Princess Charlotte turned three. He was too young to bring out for the royal wedding of the Duke and Duchess of Sussex, of course.

We'll just have to wait until July 9 to see Prince Louis again in all his splendor. For now, royal watchers can stay occupied speculating about who his godparents might be (perhaps third time might be a charm for Prince Harry, who has yet to be chosen), and what Kate Middleton might wear.

And scroll through pictures of the previous christenings, because they're pretty darn adorable.