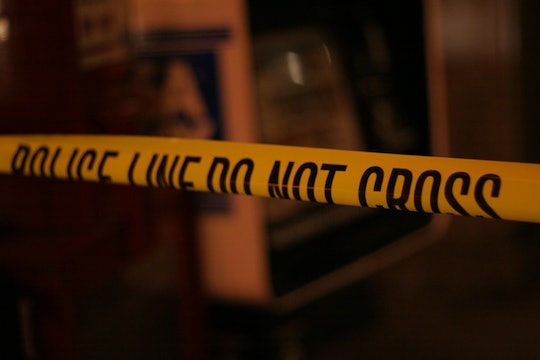 Earlier: On Wednesday midmorning, a shooting took place at Inland Regional Center in San Bernardino, California. Upwards of one to three suspects fled the scene following the shooting that has killed 14 and wounded 17, and two suspects in the San Bernardino shooting have been apprehended by officers after a police pursuit (one of the suspects being female). The New York Times reports that chatter came in on the local police scanner just after 3 p.m. CT saying that shots had been fired at 1757 Richardson in San Bernardino. "It's a very bad situation," could be heard on the scanner, the NYT reports.

After a 16-minute stand off, an officer then allegedly reported "suspect down." Local media, adds the New York Times, showed a man on the ground, lying limp and not moving. A long gun appears to sit next to his body on the ground, shadowed by a tree overhead. Across the street, a black SUV covered in bullet holes is believed to be the suspect's vehicle. Most of the suspect's body seems to be covered by a tree, and ABC has made a concerted effort not to show the suspect's body, as it's a fairly gory scene.

Prior to the police pursuit, Jarrod Burguan, chief of the San Bernardino Police Department told local and national media on the scene that he and local law enforcement had "no information at this point to indicate this is terrorist related in the sense that people may have been thinking." He added:

Early reports indicate that there could be an additional one to two suspects still at large. Sgt. Vicki Cervantes of the San Bernardino Police Department:

There were shots fired, officers were involved, and a suspect is down.

These photos are not graphic images. Instead, they show the police approach to the situation, as well as the standoff that took place.

A police car takes off in pursuit of the at-large suspected gunmen.

A team of police trucks and vehicles happen upon the black SUV.

A photo of the suspect's reported vehicle, with gunshots visible through the front windshield.

The black SUV was parked.

A Close-Up Of The SUV

An Aerial Close-Up Of The SUV

Bullet holes by police can be found all over the car.

Reports indicate that there may be more than one suspect in the car. Police approach the vehicle.

A team of police approach the suspect's vehicle.

A team of officers standby to help.

Officers in San Bernardino prepare to move toward the suspect's vehicle.

Where it's believed a second suspect was inside.

Police in the area are reportedly in search for a possible third suspect.