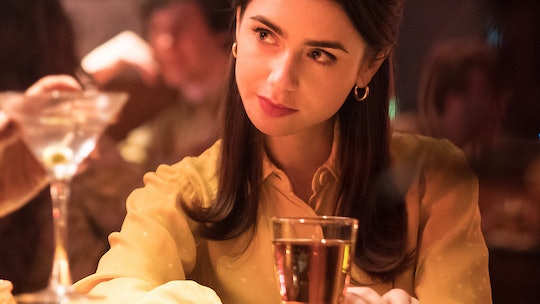 When Extremely Wicked, Shockingly Evil and Vile premiered on Netflix, true crime fans were sent into a frenzy. While most people know about Ted Bundy and his crimes, the Joe Berlinger-directed film turns the narrative on its head by telling the serial killer's story from the eyes of Liz, Bundy's girlfriend. Since the biopic sheds some light on a new perspective, fans have been drenched in curiosity, seeking out information in regards to a woman who is very much alive, including what Elizabeth Kloepfer looked like. While there aren't a lot of photos of Ted Bundy's girlfriend readily available, fans of Netflix's Conversations with a Killer have already seen a old pictures of the couple during their rocky relationship.

Eight years before Bundy was executed in 1989, Kloepfer published The Phantom Prince: My Life with Ted Bundy under the pseudonym Elizabeth Kendall. Per Biography, the memoir chronicled the couple's relationship from start to finish. Bundy and Kloepfer first met at a bar in 1969 after the recently divorced mother moved from Ogden to Seattle. Although Kloepfer found a job as a secretary at the University of Washington, she explained that she wanted to feel loved and was desperate to find a father figure for her daughter, making it easier for Bundy to slip into her life.

Eventually, Kloepfer grew dependent on Bundy and the couple almost got married. That being said, Kloepfer's relationship with Bundy was anything but magical. “We would be getting along fine, and then a door would slam and I would be out in the cold until Ted was ready to let me back in,” Kloepfer wrote in her book, per Cosmopolitan.

In 1974, Bundy moved from Seattle to Salt Lake City and the couple continued a long-distance relationship. That same year, two rapes and murders were reported and Kloepfer grew increasingly suspicious of her then-boyfriend. According to Vanity Fair, Kloepfer reported Bundy to the police multiple times after she found haunting items in his apartment, but was ultimately turned away because Bundy had no criminal record and the two continued dating.

In 1975, Bundy was pulled over for speeding in Utah and was arrested for kidnapping. Per Newsweek, the couple continued an off-and-on-again relationship for the next few years. However, Kloepfer and Bundy broke up in 1980.

So where is Kloepfer today? According to Cosmopolitan, Bundy's ex-girlfriend is now out of the spotlight, along with her daughter. However, it is known that Kloepfer lives in Washington and she even visited the Extremely Wicked, Shockingly Evil and Vile set to help the team tell her story.

In an interview with This Morning, Lily Collins, who plays Kloepfer in the dramatized film, revealed that meeting Kloepfer helped her get into character.

"I went and met the woman that I play," Collins said. It was really helpful. She was so gracious, giving me material to look at and speaking to me."

Per Vanity Fair, Kloepfer also brought in photo albums that helped the film's team understand what Kloepfer felt towards Bundy during her time with him. But despite her involvement in the film, it's unclear if Kloepfer will see Extremely Wicked, Shockingly Evil and Vile.

"I don't know if she's going to see the movie because it's difficult," Collins revealed to This Morning. "But within the filming process she came on set and she was a positive light on set. You wouldn't expect that with what happened. She gave us her support. She's really lovely."

Ted Bundy's story has been retold to true crime fans more time than I can count. However, Extremely Wicked, Shockingly Evil and Vile offers viewers a new perspective that will make you rethink everything when it comes to the psychology of deception.