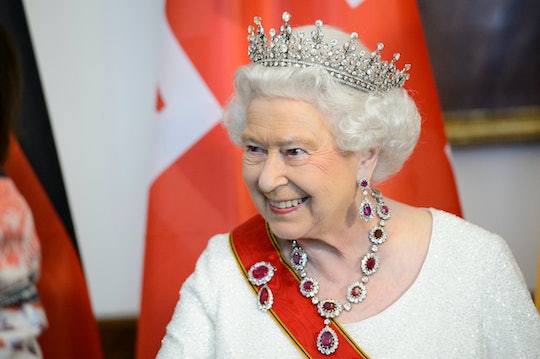 The average human can typically only get away with wearing a tiara on special occasions, such as their wedding, sweet 16, and of course on Halloween. But Queen Elizabeth II is one of the lucky few who can pull off wearing a tiara any day of the week. She is the Queen of the United Kingdom, after all. Over the course of her 92-year long life thus far, the queen has worn numerous gorgeous tiaras, each with a meaningful backstory. And photos of Queen Elizabeth II's tiaras serve as a *sparkly* reminder that her glitzy collection is filled with so much history.

Before she became the queen upon her father George VI's death, she was known as Princess Elizabeth. In 1947, six years before her coronation, the then-princess wed Prince Philip, Duke of Edinburgh, formerly known as Prince Philip of Greece and Denmark. At their wedding, she wore Queen Mary's Fringe Tiara, according to The Court Jeweller.

The tiara was made three decades earlier, in 1919, for Elizabeth's grandmother Queen Mary, as noted by The Court Jeweller. It was made from stones that belonged to King George III, and it is also known as the King George III Fringe Tiara, according to Royal Exhibitions. Queen Mary eventually passed the tiara down to Queen Elizabeth The Queen Mother (Elizabeth's mom), who loaned it to her daughter Elizabeth for her wedding day. When Queen Elizabeth The Queen Mother passed away in 2002, she left Queen Mary's Fringe Tiara to Queen Elizabeth, The Court Jeweller noted.

For her coronation on June 2, 1953, the queen opted to wear a crown rather than a tiara. She wore the Imperial State Crown, which was made for the 1937 coronation of her father, King George VI, Town & Country reported. It is absolutely loaded — it features 2,868 diamonds as well as 17 sapphires, 11 emeralds and 269 pearls, according to the Royal Collection Trust. Wowza! Not to mention, its design was based on a crown that was designed for Queen Victoria in 1838, according the Royal Collection Trust noted.

The Girls of Great Britain and Ireland Tiara

For Queen Elizabeth's wedding, her grandmother Queen Mary gave her The Girls of Great Britain and Ireland Tiara, according to The Court Jeweller. The tiara was originally presented to Queen Mary upon her wedding in 1893, from a committee called The Girls of Great Britain and Ireland, explained The Court Jeweller. The queen has worn this tiara on numerous occasions, which makes sense, considering the tiara is reportedly lightweight and therefore more comfortable to wear, reported The Court Jeweller. (If real tiaras are anything like headbands, most of them are probably pretty uncomfortable...)

In 1921, Queen Mary bought the Grand Duchess Of Vladimir Tiara from the daughter of the Grand Duchess Vladimir, Town & Country reported. Mary passed the tiara onto her daughter, Queen Elizabeth in 1953, The Court Jeweller added. The blog also noted that the tiara originally featured pearl drops (dangling pearls hanging from the loops), but Queen Mary had the tiara altered, allowing it to also be worn with emerald drops. The queen has worn it on many occasions since then — sometimes with pearl drops, sometimes with emerald drops, and sometimes with no drops at all.

The president and people of Brazil celebrated the queen's 1953 coronation by gifting her an aquamarine necklace and matching earrings, explained the blog The Royal Order of Sartorial Splendor. In 1957, she commissioned jewelry company Garrard to make her a tiara featuring diamonds and aquamarines to match the set, which is now known as the The Brazilian Aquamarine Parure Tiara. A year later, Brazil gifted the queen with a bracelet and a brooch that perfectly matched the necklace, earrings, and tiara, The Royal Order of Sartorial Splendor added.

That was far from the only tiara the queen commissioned from Garrard. In 1973, she had Garrard create The Burmese Ruby Tiara, reported The Royal Order of Sartorial Splendor. It contains 96 rubies, which were all gifted to her on her wedding day from the people of Burma, the site noted. Traditional Burmese beliefs dictate that rubies can protect one from evil and illness, and there are 96 diseases that can plague the human body, hence the 96 rubies. The diamonds in the tiara were originally part of the Nizam of Hyderabad Tiara, which she also received for her wedding, according to The Royal Order of Sartorial Splendor.

On her wedding day in 1947, the queen's father King George VI gave her the George VI Victorian Suite, which was a matching necklace and earrings, reported The Natural Sapphire Company. Then, 16 years later, in 1963, the queen commissioned a tiara, known as the George VI Victorian Suite Tiara, and bracelet to match. The pieces feature sapphires surrounded by diamonds, which is reminiscent of the engagement ring later worn by both the late Diana, Princess of Wales and Catherine, Duchess of Cambridge. (You can see a clearer photo of the tiara on Getty Images.)

Even though the queen owns so many other tiaras (she has plenty others, in addition to these), it's clear that each one is loaded with meaningful history.