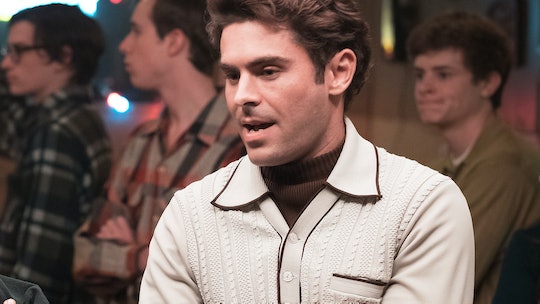 Can you really call yourself a true crime fan if you haven't heard of Ted Bundy? The answer is no. Netflix's Extremely Wicked Shockingly Evil & Vile arrives on May 3, and viewers will see the case unfold from a different perspective. Although his story has been told a number of times, the Netflix film plans to shed some light on the American serial killer's charming personality through the eyes of his longtime girlfriend, Liz. And while fans criticized Zac Efron's portrayal, these photos of the real Ted Bundy show that Extremely Wicked Shockingly Evil & Vile wasn't too far off the mark.

Bundy's crimes should not be taken lightly. He was a rapist and murderer who preyed on innocent women across the United States. In 1989, he admitted to killing 30 people in the span of five years and on Jan. 24, he was executed in the electric chair. Although Bundy's acts are frightening enough, the serial killer's ability to manipulate people with ease adds an element that people often overlook. And that point is exactly what Extremely Wicked Shockingly Evil & Vile is trying to make.

In an interview with Bustle, director Joe Berlinger explained why the film's portrayal doesn't romanticize Bundy.

"I think the idea of this particular story, making a movie about Bundy, equals glorification of him is a very naive and knee-jerk reaction," Berlinger said. "Because if you actually watch the movie, the last thing we’re doing is glorifying him. He gets his due at the end, but we’re portraying the experience of how one becomes a victim to that kind of psychopathic seduction."

Rather than focusing on the Bundy's violent acts, Extremely Wicked Shockingly Evil & Vile puts a spotlight on the serial killer's charismatic personality and seemingly harmless looks, which — horrifyingly enough — allowed him to get away with the crimes for so long.

Speaking with Digital Spy, Berlinger defended his decision to cast Efron for the role and shared that the casting added to the story they are trying to tell.

"What we're doing is portraying the psychology of deception and betrayal," Berlinger revealed. "And that is an important social message."

In the end, it seems that Berlinger views Extremely Wicked Shockingly Evil & Vile as a cautionary tale of some sorts.

"The best way to honour the victim is to tell the story through the victim's POV, and to arm a new generation about the lessons of Bundy, which is, just because somebody looks and acts a certain way, it doesn't mean you should trust them," Berlinger said.

In Jan. 2019, forensic psychologist and FBI and law enforcement consultant, Darrell Turner, spoke to Insider about the Bundy case. Turner revealed that Bundy's charm was a legitimate reason why he went by undetected.

"I think it's important that people understand that Ted Bundy was successful because he was so 'ordinary,'" Turned said. "But more than that, he was charming and handsome and a charismatic young man."

Turner also explained that "he used guile and cunning, charm, and sympathy to win the trust of his victims and lower their defenses before subduing them."

Netflix's Extremely Wicked Shockingly Evil and Vile doesn't try to romanticize the gruesome crimes of Bundy. Instead, the film reexamines the case and how the serial killer was able to get away with the acts for so long.

Extremely Wicked Shockingly Evil and Vile will begin streaming May 3 on Netflix.