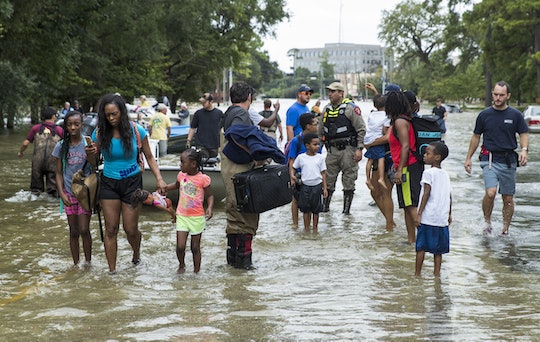 In times of crisis, there are two types of people. Those who think only of themselves, and those who step up to the plate. It's always lovely to be able to report news of that second type of human being, especially right now. Because when you see photos of this Texas furniture store owner sheltering hurricane victims, you will be comforted in the knowledge that there are, indeed, good people on this planet after all.

As Houston, Texas was beset with torrential downpours and rising floodwaters from Hurricane Harvey, one furniture store owner didn't think twice about lending a hand. Lending several hands, in fact. Jim "Mattress Mack" McIngvale, the owner of several Gallery Furniture Stores in the area, took it upon himself to open the doors to his Gallery Furniture Grand Parkway store as an official shelter for hurricane victims. McIngvale told CNN that he and several of his delivery drivers took big trucks out on Sunday, searching for people in need of shelter. The trucks can apparently maneuver through the high waters much easier, and so the furniture owner set about his mission. He said, according to CNN:

All day on Sunday we went around rescuing people out of high water stranded on overpasses. We brought about 200 people into the store that way.

He and his team brought those people back to the 160,000-square-foot showroom as a safe haven. Two Gallery Furniture Store locations are now listed as official shelters, Grand Parkway in Richmond and North Freeway in Houston, according to Time.

To date, the showroom houses 300 evacuees, some of whom were rescued by strangers on boats who were scanning neighborhoods looking for those in need of aid, according to CNN. Once these people arrived at the Gallery furniture store, they were given comfortable places to sleep, lounge, and watch the news. Donated items like towels and clothes were made available, while local restaurants took it upon themselves to feed the staff, service members, and evacuees.

This response from the "Mattress King" of Houston might come as a surprise to those living outside the Houston area, but not to locals. McIngvale is something of a local celebrity, for his colorful commercials as well as his kindness. During a recent interview with NPR, McIngvale explained that struggle is meant to bring out the best in us:

The people of Texas are resilient, as are the people of this country. And, you know, my daughter's favorite saying is if not for my struggle, I would not have known my strength. All of us in Texas are struggling right now. But it will help us to be more resilient, strong human beings who can help out the community. We believe it takes an entire village to raise a child, and that's why we're letting these people in here. And it's a win-win for everybody.

Resilience certainly helps in situations like this... but perhaps generosity and empathy have truly won the day.