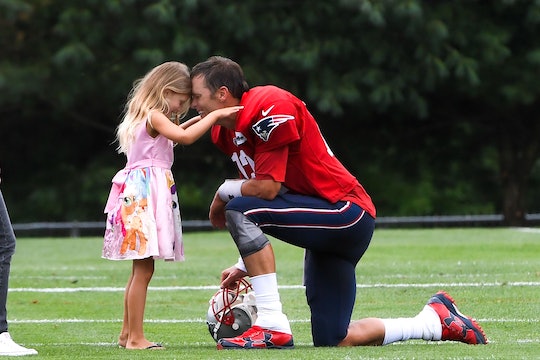 A certain New England Patriots quarterback headed to Mercedes-Benz Stadium (or The Benz, as us in-the-know types call it), for his ninth Super Bowl on Sunday night, bringing with him a winning record (5 wins to 3 losses), and the support of his wife, Gisele Bündchen, and his three children. Photos of Tom Brady's family at the Super Bowl show that no matter how much controversy surrounds the QB, his fam is always going to be in his cheering section.

Fun fact: At the ripe old (so young) age of 41, Brady has secured more Super Bowl appearances than every single team in the NFL outside of his own, the Patriots, according to CBS Sports. "No quarterback has even played in more Super Bowls than Brady has won," Super Bowl Nation breathlessly reported. Impressive! But no one is more impressed, it would seem, than his devoted wife and kids. Before we dig into the moments from Sunday's game, let us first hearken back to Super Bowl 2018, when Bündchen stole the social media show as soon as an eagle-eyed Tweeter spotted the mom of two tossing back glasses of wine like a suburban SAHM on her first ladies' night out in six years. It really was a hashtag relatable moment, and Twitter responded as only Twitter can...

This, as anyone rooting for a partner undertaking something major and Earth-shattering will understand (in my case, I can think back to just a couple of weeks ago, as I stood by in the freezing cold, extremely supportively, without sharing any "unhelpful suggestions" [such as: why did you put "old" gas in if that's what ruins the carburetor?, and what is a carburetor? and remember how I wanted to move to California ten years ago before our daughter started kindergarten?], and watched my husband figured out how to bring our deceased snow blower back to life with the help of a You Tube tutorial and the pressure of an oncoming Icemageddon).

It's kind of EXACTLY comparable to this super supportive Instagram post Bündchen shared ahead of Sunday night's game:

This super mom also helped her daughter cheer on their fam's MVP, posting this shot of their 6-year-old Vivian Brady sporting one of her daddy's jerseys on the morning of Super Bowl Sunday:

Papai, as I'm sure you know, being a citizen of the world, is Portuguese for "dad."

Of course, last year, Giselle had to console her hubby on a disappointing loss. As E! reported, after congratulating the Eagles on their victory, Bündchen wrote, "Congratulations Patriots for giving your best and to my love, we are incredibly proud of you because we are able to see every day all the commitment, sacrifice and hard work that you have devoted to become the best in what you do."

On a lighter note, the day before Sunday's game, Brady himself took to Instagram to show that his entire fam was indeed there with him in Atlanta:

"Family and Football ❤️❤️ " he wrote. Aw! I love a man who speaks in classic red heart emojiis.

On game night, Gisele-spotters had to wait for what felt like an eternity (like, a literal eternity) to catch a glimpse of her husband's biggest fan — just after the start of the fourth quarter (which took place approximately 85 years after kick-off), the cameras finally panned to the supermodel looking extremely, shall we say, ~invested~ in the game.

After what was clearly a thrilling win for the whole family, little Vivian got to do some celebrating with her dad and his new trophy!

No, no you cannot.

And here's a great shot of the happy couple stealing some love in the middle of the crowd.

There's no doubt: Papai nailed it.