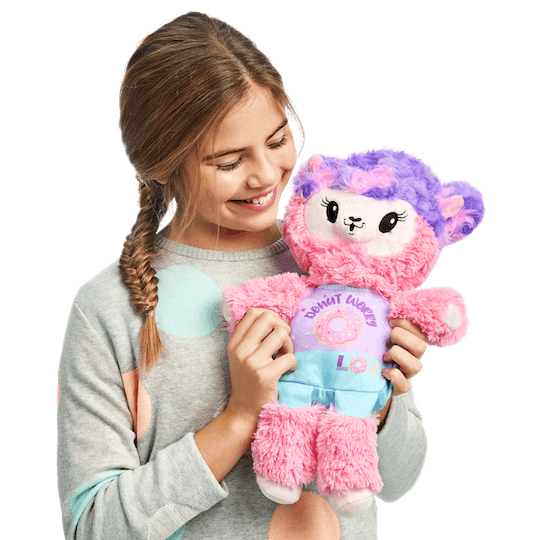 Three things kids love are sleepover parties, sweets, and adorable animals. That's why the latest offering from Moose Toys is destined to be a hit: The Pikmi Pops Pajama Llamas are soft, rainbow-colored plush animals that smell like dessert and wear pajamas, so every night will feel like a sleepover.

Packaged in a colorful popcorn box, Pikmi Pops Pajama Llamas arrive tucked away in a little sleeping bag. (Hang on, it just keeps getting cuter.) Pajama Llamas also come with fun surprises for the sleepover party, such as sleeping masks, hair ties, stickers and more. Plus, one in 10 packs comes with a bonus "nail glitter" surprise, which definitely sounds like the stuff of a classic slumber party activity.

There are two Pajama Llamas to collect, each with its own distinctive scent. Poppy Sprinkles is marshmallow-scented, while Gemmi Jamma smells like chocolate. Each one is just as colorful and cute as you'd expect, with colorful prints like donuts or rainbows on their PJs. These large plush toys are sure to become BFFs with plenty of kids in the coming months.

The popcorn box-inspired packaging is undeniably adorable. Kids will eat this up. Oh, and the little llama in its sleeping bag looks very snug.

Although their official launch is still several weeks off, early reviews of the llamas are super positive. In fact, some fans are saying it can actually help kids to get into good sleep habits.

"One of the main things we always say about getting your kids to sleep is having some kind of sleep ritual," said YouTuber Natalie Diaz with Twiniversity, in the Pajama Llamas from Moose Toys @ Toy Fair 2019 video.

"So now Pajama Llama is actually going to help you create that sleep ritual. Because after your kids have brushed their teeth and put their pajamas on, it's time for their Pajama Llama to go to bed, too." It's a creative approach to sleep training that just might convince your kid to stop fighting off bedtime.

Plenty of parents are already more than familiar with Pikmi Pops, the ridiculously adorable line from Moose Toys. The Pikmi Pops aesthetic is similar to that of the llamas, although most of the regular Pikmi creatures are a bit smaller. Still, there's a big focus on extremely cute animals and rainbow colors, as well as a strong dessert theme. Pikmi Pops Cheeki Puffs, a line of super cute, sweetly-scented animals dressed up like a classic beauty puff, even dispense glitter. The point is, if your kid likes one Pikmi Pop toy, they'll probably like (and want) them all. Not that you can blame them, of course.

Whether your family is new to Pikmi Pops, or you already have a whole collection of the sweet critters, these precious Pajama Llamas are sure to show up at a birthday slumber party soon. Hopefully, their ability to help kids sleep will be proven true.