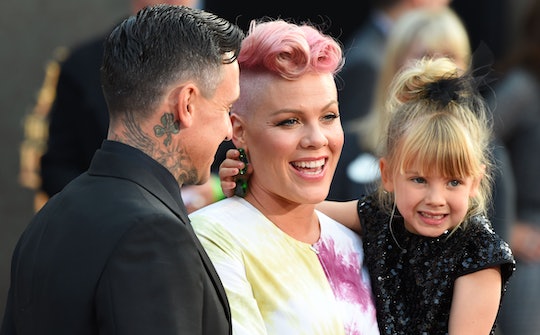 Pink Called Herself A Helicopter Mom, & Wait For It... The Internet Loved It

To be a parent, you have to have a sense of humor. How else do you get through all of the diapers, tantrums, and playdates? And there's no doubt that Pink has a sense of humor when it comes to her kids. This weekend, for example, Pink called herself a helicopter mom in a video on Instagram and people are totally loving it. In the video, Pink is riding a motorcycle with her husband Carey Hart as she waves to the camera and blows a kiss — literally, nothing too spectacular happens. But she captioned it, "These are the videos I send to my daughter while I'm out with papa. Even when I'm on a motorcycle I'm still a helicopter."

Hey, you have to check in, right? Then something crazy happened on social media. Instead of lecturing Pink about using a cell phone while riding or critiquing her protective wear, the internet was actually nice to her and could not be more on board with her self-described parenting style. Amazing, right? One follower wrote, "I don't think you're a helicopter, Willow seems to enjoy her [independence] too much for that, you're just a loving mom who includes her kids in all aspects of life."

Another person added, "From a veteran helicopter mamma-you do what you feels is right!!! My teens [love] you ever since they saw your VH1 behind the scenes when they were little!! Keep up the PHENOMENAL job!!"

It didn't stop there, with another follower writing:

That's ok I'm still a helicopter and my kids are 25 and 23. Soon ill be helicopter gma. Love that you guys don't use your money and celebrity to have nannies do the hard stuff. Your time and love is all they need. All the "stuff" and trips mine barely remember. They remember your time.

"You are one hell of a mother!!! DON'T ever forget it," another fan gushed.

Whoa... when did Instagram becomes a safe space for celeb moms? It's pretty rare that people didn't just revert to straight up judgement.

Pink seems to have such a nice family life, right? Willow, Pink and Hart's oldest child is 6 years old and in December 2016, they welcomed their son, Jameson. Before Jameson was born she said that she would like have three kids. But there's a catch. The singer joked on Good Morning, America:

I feel like I have two kids right now. I would like a third. No, I want to say that Carey Hart's an awesome husband and a really good dad, but he's also like a second child.

She said at the time, "I love being a mama. I made a choice a long time ago that I was going to have a successful family and that is my absolute number one goal in life." Helicopter or not, she's definitely already living her dream, then.

Seriously, I sort of want Pink to be my mom. At the MTV Video Music Awards this year, Pink gave a moving speech after accepting the Video Vanguard award all about empowering her daughter and body image. She recounted a time when Willow came home and called herself ugly. According to People, Pink said:

She went on to say that she made a presentation in a Word document for her daughter, telling Willow that beauty standards are messed up anyway. And that she was amazing just the way she is — and always will be.

According to People, Pink said:

I get my feelings hurt all the time. It doesn’t feel good to hear mean things about yourself, but if you’re human, you’re going to hear it. If you’re past the age of 12, you will, at some point, be heartbroken by someone else. So I’m just trying to make [Willow] more resilient.

If that means Word document presentations about body shaming and sending kisses from the back of a motorcycle, so be it. Willow is definitely loved and Pink picks up on all of her moods. When Jameson was just weeks old, Pink told Ellen DeGeneres that Willow had a rough time of it. "I literally put Jameson down when she walks in the room. [Willow is] a little weepy these days so we’re working it out," she said, according to People.

Helicopter mom, or super loving? Honestly, it's hard to tell the difference when it comes to Pink.