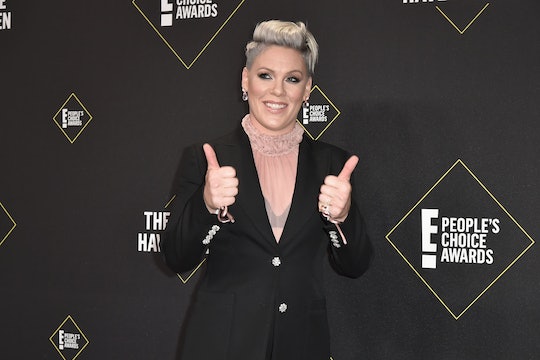 There are so many side effects of self-isolating during the coronavirus crisis it's difficult to quantify them all. For instance, what is everyone going to do to keep up their beauty routine? I know it seems inconsequential, but still... it's a thing. And now that I've seen Pink cutting her own hair during self-isolation it's become crystal clear: This is the fate that awaits us all.

The "Beautiful Trauma" singer is, like so many other people across the planet, following the instructions of the World Health Organization by self-isolating at home with her husband Carey Hart and their two kids, 8-year-old daughter Willow and 3-year-old son Jameson, according to USA Today. Pink is trying to make the most of her time at home with her family, apparently, as well as trying to figure out how to deal with a bit of an interruption to her beauty routine; specifically, dealing with her signature punk rock hair style. On Tuesday Pink shared a "PSA" while she wandered around her house eating pretzels during the quarantine, admitting that she had been drinking enough that she "decided to make it a sport." And apparently when she's drinking she has "brilliant ideas." Like telling herself, "I can cut hair! I can totally cut hair!"

And so it begins.

Pink went on to show off the sides of her hair, which were (no offense to the singer, obviously everyone loves her) not exactly evenly sheared. Something she admitted herself in the video, by the way. Which is the sort of thing that happens when a person is wandering around the house with too much time on their hands and oh yes, access to alcohol. And if you think Pink learned her lesson, think again. She ended the video by saying she might consider trying to fix the problem that night.

Already fans are supporting her decision by writing messages like "I feel like we're on the same vibe as Pink," and "this is going to be me."

This could be lots of people all over the world if the self-isolation period lasts much longer, something medical experts have predicted could happen if efforts to stop the spread of COVID-19 aren't successful in the next few weeks, as per Vox.

This video from Pink could become the norm in the near future. People who are either working from home or not working at all dipping into their cups and deciding that they can probably cut their own hair.

I'm pretty sure this is how bangs first became a thing but don't quote me.