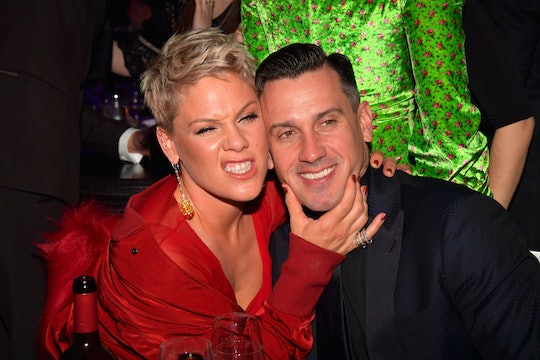 They've been together for 19 years, almost half their lives. They've grown two careers and created two children together, and manage to look happy together even during a pandemic. What's their secret? Well Pink got candid about her marriage to husband Carey Hart in a poetic Instagram post, calling their relationship both "awful" and "wonderful." And their secret appears to be honesty, humor, and learning "how to love yourself so that the other person can, too."

The "Beautiful Trauma" singer has been married to Hart for 12 years, but they first began dating in 2001 after the met at the Summer X Games. They had an on-again, off-again relationship until first marrying in 2006, separating and then reuniting in 2008. They've been together ever since, welcoming 9-year-old daughter Willow in 2011 and 4-year-old son Jameson in 2016.

On Monday, Pink took to Instagram to essentially pen a deeply felt dissertation on her marriage with Hart. Along with a photo of herself held in an embrace by Hart, Pink wrote that she and her husband "have been at this a long time, and it is our relentless and stubborn idealism that keeps us together." She added, "Marriage is awful, wonderful, comfort and rage."

The singer went on to write that she believes marriage "is boring, terrifying, and a total nail biter," adding, "It is loving another fallible creature while trying to love yourself. It is a lifetime of coming back to the table. People laugh at us because we’re either fighting or laughing. They roll their eyes when we talk about therapy."

But at the end of the day, the Pink says it's all "worth it."

Pink expanded on the fact that she and her husband had gone to therapy together. "Therapy isn’t for weak people or hippies or liberals," she wrote. "It’s for broken people that want to be whole. It’s for runaways that want a family. It’s a lesson on how to sit down and listen. How to love yourself so that the other person can, too."

The "Just Like A Pill" singer has a history of being honest about her marriage, like in 2017 when she spoke to The Guardian about monogamy and said, "There are moments where I look at [Hart] and he is the most thoughtful, logical, constant … he’s like a rock. He’s a good man. He’s a good dad. He’s just the kind of dad I thought he’d be and then some,” she said. “And then I’ll look at him and go: I’ve never liked you. There’s nothing I like about you. We have nothing in common. I don’t like any of the sh*t you like. I don’t ever wanna see you again.”

After a rocky beginning to their relationship, Pink and Carey Hart both know what they're fighting for. Their marriage, even if Pink admits it's not easy, they seem to be winning the fight together.