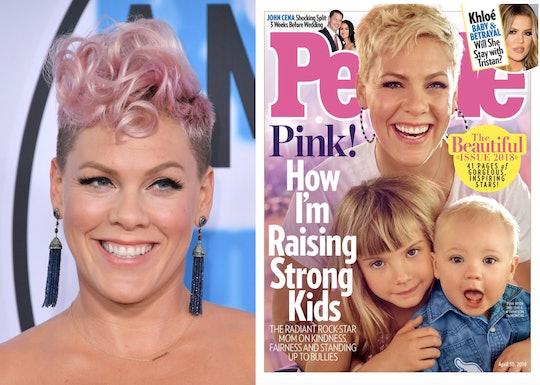 Real talk: this adulting thing is hard. It can feel sort of like being thrown in the deep end of a pool without so much as a kickboard, and adding a kid or two to the mix is... Well, like being thrown into a pool with kids, really. So it might be a comfort to learn that sometimes, even Pink wonders if she's doing anything right. In a new interview with for the cover of People, Pink, a rich, famous, successful mother of two, admitted that she wasn't born with an innate sense of wisdom when it comes to parenting, either, and just like the rest of us, she's just trying to do her best and hoping that it all works out OK.

You may have heard Pink's comments about parenting before, like when she told Today that her main concern for her daughter Willow, age 6, and son Jameson, 15 months, is that they grow up with a healthy sense of self-esteem. And she's obviously getting that right, as we all learned from her Video Music Awards speech last year when she shared an anecdote about her daughter worrying about her looks, to which Pink replied, "We don't change. We take the gravel in the shell and make a pearl, and we help other people to change so they can see more kinds of beauty." Here are a few gems from her People interview:

"The thing about parenting is you never know if anything you're doing is working," Pink acknowledged. "That's been the most humbling thing for me. In my head, I sound amazing and then I turn around and her eyes are completely glazed over. I have no idea. We'll see." It's true; as parents, we won't really know if we nailed it until our kids grow up and either cure cancer or go to prison, but if you pay attention, there are little clues along the way. Every time your kid says "please," or shares a toy, give yourself a little pat on the back. You did that!

There's no one right way to raise kids; your approach is dependent on everyone involved. Pink said her parents' style was more "free range, I guess." Both her parents worked full time, and her mom was also a full time student on top of that, which meant that she and her brother spent a lot of time without supervision. Did it work? "I had a good childhood," she told People. "I worked out OK." But that's not how she's doing it, and that's fine, too.

She's There For Her Kids

The ability to take her kids on tour with her means that Pink can take a more hands-on approach to parenting. "I believe in needs being met and faith being implemented," Pink told People, "and I believe in letting your kids know they can count on you, and that you'll be there. I always tell Willow, 'I'm going to teach you the rules so that you'll know how and when to break them.'"

People described Pink as "tomboyish" in the very first line of its cover story, but she won't be putting her kids into boxes like that. When asked if she's raising her them "gender-neutral," she replied, "Absolutely. [But] I feel like gender-neutral is in itself a label and I'm label-less. I don't like labels at all so I believe that a woman and a girl can do anything."

Pink has "so many worries and fears as a parent," she admitted. "I don't know if the world's going to be fine, and so I pray a lot. I cry a lot." But at the end of the day, she and her husband, Cory Hart, "try not to take life too terribly seriously." They spend time with their kids, they laugh together, and above all, she said, "They're going to be fine." And chances are, yours will be fine, too.