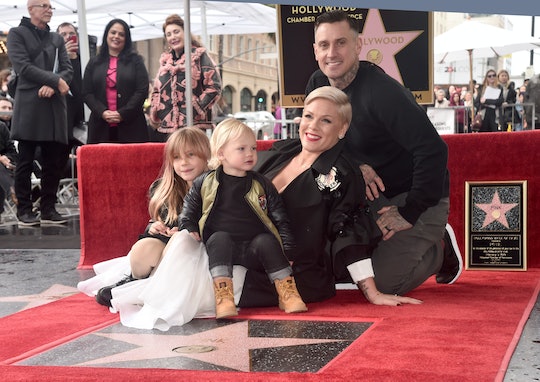 Not to overstate the glaringly obvious here, but there's a delicate balance to being a working mother. Not only are you trying to juggle the needs of your kids and your job, but I like to think you are also trying to find some sort of career satisfaction for yourself in the mix. As a working mom myself, I think that last element gets forgotten sometimes because we're so busy trying to make sure everyone else is happy. Which is why we need a role model. Pink is nailing it as a working mom in these tour photos with her kids, because I think she's finding room for herself in there as well. And what a great example that is for her kids to grow up with, am I right?

The singer is mom to 7-year-old daughter Willow and 2-year-old son Jameson with husband Carey Hart, and she just kicked off the second part of her Beautiful Trauma tour in Fort Lauderdale on Friday. Before the show began, it would be understandable if Pink needed some time to practice or be alone to get into the right head space or whatever. But no, Pink is a working mom who brought her kids on tour... and so she kicked off her tour by laying on the ground and chatting happily with her two kids.

She captioned the sweet photo, "Shooting the sh*t before the first show," and if this doesn't embody what it means to find joy in your kids and joy in your career I simply don't know what does. This is sort of a long-standing tradition with the "What About Us" singer, finding ways to incorporate her kids into her work life. Perhaps one of the most obvious examples of this would be when she and her daughter Willow performed the song "A Million Dreams" from The Greatest Showman together in October.

And of course, there she was last January trying to train and prepare for her big tour... with her daughter Willow essentially climbing on her, unconcerned, as per ABC News.

I think it's important to note that Pink isn't dragging her daughter along with her looking sullen, or even worse, apologizing to anyone for having her kid with her at work. She is working and being a mom at the same time in the same moment, and she's masterfully unapologetic about it.

It's paying off in surprising ways as well, apparently. Her kids seem to be paying attention to their mom's work, so much so that when Pink didn't win a Grammy in February her kids made her one out of tin foil, as per Insider.

I genuinely think Pink has the right way of things here. I think it's too easy as mothers to spend so much time feeling guilty, so much time trying to compartmentalize our lives, that we are missing out on something truly joyful here. Missing out on an opportunity to be a mom and work and be happy all at the actual same time.

Now if only every employer in the world would see the benefits of this attitude, we could all get to it.