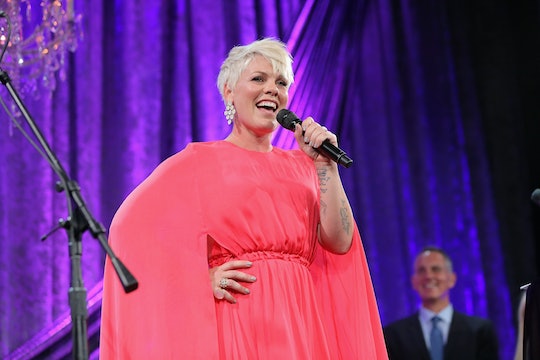 Motherhood changes you as a person, and forces you to grow. Celebrity moms are not immune to this, as Pink revealed in an interview with the Today show. She's undergone many transformations throughout her lengthy career, but Pink says being a mom changed her more than anything else and made her a better person overall. All parents can totally relate to her heartwarming sentiments.

Pink told Today show host Carson Daly that like most mothers, she's "completely changed since being a mom." The 39-year-old singer said welcoming her two kids made her a better, more accepting person for others and herself. Pink also told Daly that she's more focused on "the world" now that she has kids, too. She said that it's important to her to make sure the planet is in good shape for generations to come. This transition doesn't just apply to her personality, either. Pink said it's affected her music, too.

"I'm much more open, I'm much more accepting of myself, I'm much more thoughtful," she told the Today show. "I think about the world more, and what we're leaving for these kids, and the direction we're headed in. And so I guess it changes your music."

Pink added that now that she has a family, kids Willow, 7, and Jameson, 2, are her top priority. She's so focused on spending time with them, in fact, that she's started bringing them on tour with her. Pink told the Today show that having them with her on the road is "like Romper Room."

Although motherhood is Pink's No. 1 focus, she recently decided to stop sharing about it on social media. According to INSIDER, she came to the decision after being attacked and mom-shamed online multiple times. Pink talked about it during an appearance on The Ellen DeGeneres Show, revealing that she's been bullied online a lot, but it was flack she faced for a half-nude photo of Jameson that pushed her to stop featuring her kids on Instagram.

"People went as far as saying someone should call child services because he didn't have a diaper on and how dare I... some of the nastiest things," she said on Ellen. "I cried so hard after that because I like to share my family. It's my proudest moment in my whole life. I'm prouder of my kids than anything I've ever done."

The controversy erupted after Pink shared a picture of herself, Jameson, and Willow looking at a pelican. Her son wasn't wearing a diaper in the picture, which she later revealed was because he'd taken it off without her noticing. She deleted the initial picture and reposted one with his penis censored.

Although she won't be posting about her kids anymore online, Pink talks about them in interviews regularly. She's been very open about how she parents her kids. In April 2018, she told People that being a parent is tricky because "you never know if anything you're doing is working." She added that it's been a "humbling" experience and that she tends to favor an affectionate approach.

"I believe in affection. I believe in needs being met and faith being implemented, and I believe in letting your kids know they can count on you, and that you'll be there," she said. "I always tell Willow, 'I'm going to teach you the rules so that you'll know how and when to break them.'"

Mom-shamers may say otherwise, but it seems Pink is doing a great job as a parent. Fans have come to look forward to her sharing her little family with them, and hearing about the ups and downs of motherhood from her. Hopefully she'll continue to share.