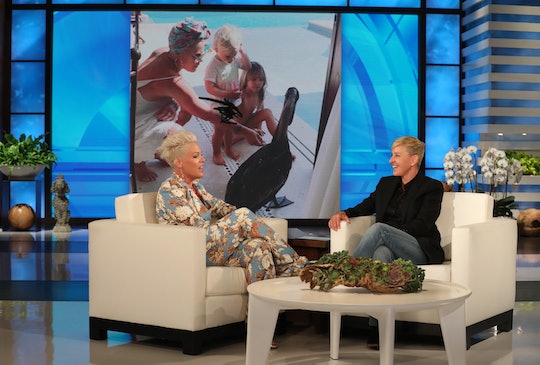 The decision to share your children on social media isn't an easy one, especially when you're famous. Each time you post your kids online, you're opening yourself up to criticism and mom-shaming from every corner of the web. Some stars, like Pink, have learned that the hard way. Despite having a notoriously thick skin, Pink won't post about her kids on social media anymore, as she said in a recent interview, and the reason why will break your heart.

The "Walk Me Home" singer appeared on The Ellen DeGeneres Show on Monday and in a preview for the episode, Pink and host Ellen DeGeneres watched an adorable clip of 2-year-old Jameson yelling out "damn it!" while playing with toy cars. After sharing a laugh over the video, Pink revealed that she often gets flack on Twitter and Instagram for posting such videos and photos, telling DeGeneres, "So many people on social media go in on me all the time."

Pink went on to reveal that after facing backlash over a photo of her 2-year-old son Jameson without a diaper on feeding a pelican, she decided not to post any more pictures of her kids online. The musician said she received a barrage of hateful messages after posting the picture, which brought her to tears. As a result, she's decided to leave her kids offline for now. In a clip for Monday's episode, Pink told DeGeneres, "I don't like injustice and how brave people are anonymously."

"People went as far as saying someone should call child services because he didn't have a diaper on and how dare I ... some of the nastiest things," she told DeGeneres. "I cried so hard after that because I like to share my family. It's my proudest moment. I'm prouder of my kids than anything I've done in my whole life." 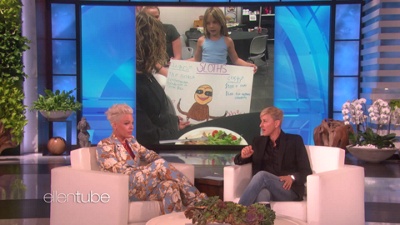 The 39-year-old singer addressed the half-nude photo of her son, which was censored with black scribbles, telling DeGeneres that she didn't see it the way her critics did. According to Entertainment Tonight, to her, it was simply a special moment between her, her children and "a pelican that flew into our room." She noted that Jameson was naked because they'd been swimming, and he "doesn't like to wear wet swim diapers." Pink said she didn't think twice about his lack of covering.

"I looked at it like, there was a pelican that flew into our room. It spent two hours with us ... it was this incredible experience for my family," Pink said, according to Entertainment Tonight. "And I have a 2-year-old [who] doesn't like to wear wet swim diapers and at some point, he took it off. I don't think like that! We're a family. We live on a farm. My kids are naked, it's what happens!"

Pink went on to say that she has no issue with criticism, as long as it's constructive. According to People, during the interview with DeGeneres, Pink said she would have reacted differently if people had just said, "'You need to be more careful because you are in the public eye and you should of thought of that.'" She noted that if her critics had been nice about their critiques, she would have been open to it.

"There's a kind way to be online. And I'm open to kindness," Pink said, according to People. "Someone else taught me that the word 'gypsy' is derogatory and I'm not a person who uses derogatory language. I wrote back to them, 'Thank you so much for being so kind and educating me. I'm editing it, I'm taking it down, and that word will never come out of my mouth again.' There's a way to do things!"

The diaper-less photo of Jameson was posted on Instagram on March 31. The backlash began not long after the image appeared on her social media account, and went on for some time. Pink deleted the initial photo, replacing it with one of her son with his penis scribbled out. She then took the time to clap back at mom-shamers, calling them "f****** disgusting." Pink also addressed her haters in a separate post on Instagram, writing, "There's something seriously wrong with a lot of you out there."

It's not easy to deal with backlash ever, but backlash over your abilities as a parent are that much more difficult. Fans will surely miss Pink's sweet family moments on Instagram, but they'll hopefully support whatever decision she feels is best for her and her family.