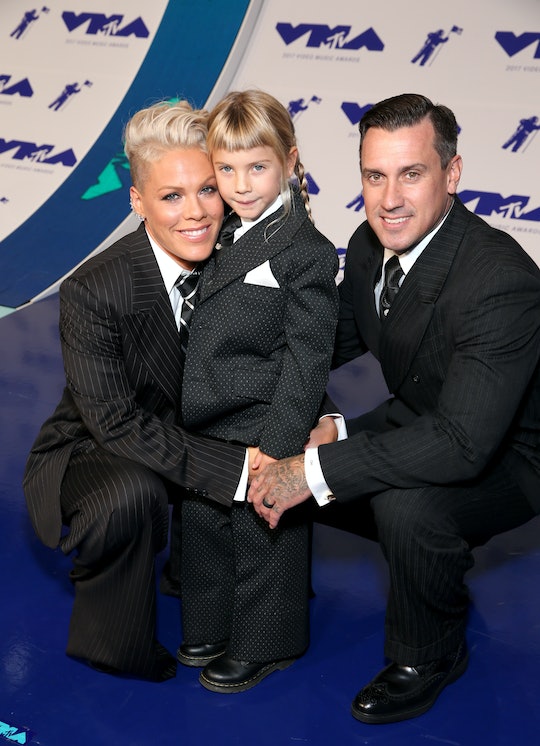 Pink's Daughter Wore A *Ton* Of Makeup To Her Mom's Show, & The Internet Can't Handle It

Fans of Pink already know that her 6-year-old daughter Willow is a True Original. Much like her own mother, Willow is clearly one of those people who is more than happy enough to march to the beat of her own drummer. And, what's more, her parents are more than happy enough to encourage her. Which is why everyone loves Pink and her husband Carey Hart, I guess. On Wednesday, Pink's daughter wore makeup to her mom's show, and the internet is absolutely loving it. Which is refreshing, considering all of the copious amounts of mom-shaming that goes on some time.

Carey Hart shared a picture of a very intense-looking Willow getting ready for her mom's concert in St. Louis on Wednesday night. And the girl wasn't phoning it in for the big night; she went full on glitter to celebrate her mom's performance. Pink glitter, to be more specific (because of course) up and down her nose, on her forehead and cheeks. With a little blue and white glitter under the eyes, for contouring, I'm guessing. And the lipstick? I mean, Willow might actually be better at lipstick application than I am. Impressive. Hart captioned the photo: "Willz make up for the St. Louis show 😂"

While the "What About Us" singer has certainly been slammed for her parenting by mom-shamers in the past, this time around the internet was really embracing the Willow love. People took to Hart's Instagram to praise both parents for letting their little girl just be herself. As Instagram user ashleyhallman1917 pointed out:

I love how y’all let her be whoever she wants to be. So many parents are always telling their child who to be or who to talk to. It’s incredible to see others who know kids need to be kids and find themselves. You are raising her to be kind and open to everyone without passing judgment along with being strong and believing in herself! I truly wish more parents would do the same!! Who knows maybe someday society will change for the better at least I hope so.

This isn't the first time Willow slayed with the glitter; just four days ago she struck a similar pose (with a similar makeup look) with her mom and 1-year-old brother Jameson in Chicago.

And again, people were praising Pink for being such a "hands-on" parent to her children.

Amazing to see a successful woman so hands on with her beautiful children. Keep being awesome.

All of this support for Pink isn't just well-earned, it's probably long overdue. Back in July, Pink shared a picture of herself cooking with then 6-month-old Jameson in a front carrier on Instagram. And people... well, let's just say they could have been nicer (and also might have wanted to look a little closer at the picture, where the baby is well clear of the heat from the stove).

It's especially life-affirming to find out that the "Just Like Fire" singer is being praised for encouraging her daughter's individuality, something she told Cosmopolitan in December is vitally important to her.

Another very important thing I tell my daughter is it’s very fun to be weird and it’s very boring to be normal. I have a rule with Willow that we don’t say mean things and we don’t say things we don’t mean.

I have a sneaking suspicion Willow won't shy away from being weird, and won't be terribly interested in being boring. I also strongly suspect her mother would keep encouraging her, with or without the support of the internet.

Still, it's just nice to see people being nice, you know?