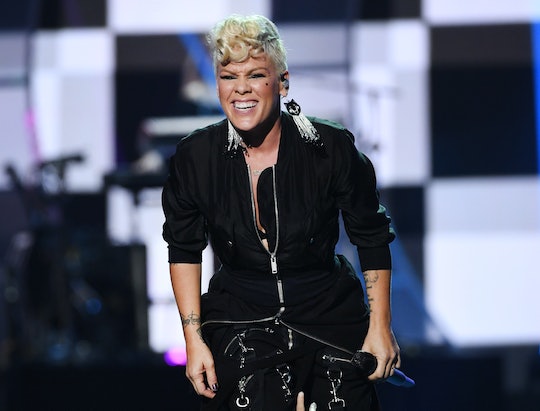 This Mom Gave Birth At A Pink Concert, So I Think We All Need To ~*Raise A Glass*~

So picture this if you will: You somehow manage to snag tickets to a Pink concert, which we all know are really tough to come by. The only issue being maybe you're pregnant, and maybe the concert date happens to land pretty close to your due date. Do you give up your spot? Don't be ridiculous, of course you don't. You roll the dice, and as it turns out things will be just fine no matter how those dice land. Just check out Pink's response to a mom who ended up giving birth at her concert. Not only does this woman have a healthy baby girl, but she also has pretty much the best birthing story ever. Not to mention the best concert story ever.

As Metro reported, Denise Jones was apparently rocking out at a Pink concert at Anfield Stadium in Liverpool, England on Tuesday night when she seemed to be having a bit of a hard time during the singer's classic opening number "Let's Get This Party Started". Perhaps on account of the baby who was really ready to be born. As local paramedic John Matthews recounted to The Liverpool Echo, "When we reached her, it was quite clear the patient was heavily pregnant and showing signs of being in labor."

It seems Jones wasn't just in the early stages of labor, she was pretty much ready to give birth right there. As Matthews told the media outlet, "We took the decision to move her as quickly as possible to the First Aid Room underneath the … stand. We continued to assess her and established she was going to have to deliver the baby in the stadium as there was not enough time to get her to hospital."

The quick-thinking paramedics delivered the baby in less than five minutes, with Jones unable to use any sort of medication, according to Entertainment Weekly. She and her mother are both safe and healthy.

Now let's talk about her name: As Jones' niece Chloe Dryhurst noted on Twitter, the mom of four named her newest arrival Dolly Pink and yes, that is the best name ever. "Baby Dolly Pink Born at @Anfield Whilst watching @Pink concert! Mum and Baby are doing," Dryhurst shared on Twitter. "Amazing, thank you to the amazing paramedics that delivered her!"

Do you know who else really loves the name Dolly Pink? Why the woman she is named after, obviously.

Pink herself shared a screen grab of the news story on Instagram with the amazing caption: "Dolly Pink wanted to get the party started."

Dolly Pink's mom told Entertainment Weekly that the original plan was to name her daughter Dolly Louis, but the change in birthing venue called for a perfect change in name. "I’m still massively in shock, just a bit gutted I missed the concert," the new mom told Entertainment Weekly. "But I couldn’t be any happier right now! The plan was to call her Dolly Louise but since she was born in the concert we’ve changed it to Dolly Pink."

Not that I want to tell anyone how to do their business or anything, but I sort of feel like Denise Jones and baby Dolly should get another chance to see Pink when next she plays in the area. It feels like they've earned it, wouldn't you say?