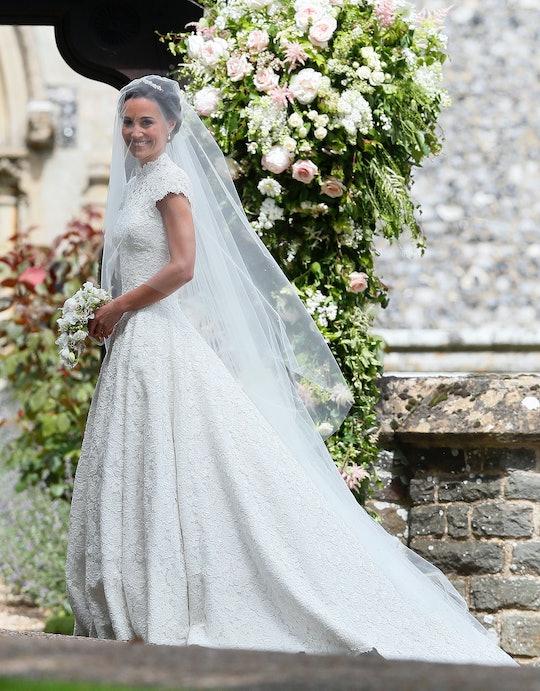 The Middleton sisters have just completed the circle of life, folks, and it's a pretty damn beautiful thing. We all remember when Pippa Middleton stood up with her sister Kate as a bridesmaid at her royal wedding in 2011. While everyone was naturally caught up in the glamour of Kate becoming the Duchess of Cambridge and marrying a bona fide prince and heir to the throne, the love story that really got us all choked up was the sisterhood. The Middleton girls together. On Saturday, when Pippa Middleton got married with Princess Kate by her side, the sisters came full circle.

Pippa Middleton married financier James Matthews at St. Mark's, a 12th century church (which had reportedly undergone extensive renovations in preparation for the event) in Englefield, Berkshire. She wore a custom Giles Deacon white lace dress with cap sleeves, and congratulations to Middleton not only for her nuptials but also for being able to pull off a cap sleeve. Members of the royal family were on hand to watch the ceremony; Prince William and Prince Harry were in attendance, arriving together wearing formal suits. This did remind me that there was a time when I secretly hoped Pippa would marry Prince Harry, but I'm over it now. And of course, Princess Kate was there, in a pale pink dress and fascinator hat, to support her sister and fix the train of her dress.

Of course, it hasn't been so very long since Pippa Middleton was fixing her sister's train as she wed Prince William in 2011, wearing a killer Alexander McQueen dress and a confident smile that said, That's right... there are two of us on this planet. So there.

This time around, Princess Kate was not an official member of the wedding party at her sister's wedding. Perhaps because she was far too busy fulfilling the unofficial role as kid wrangler. Her two children were part of the wedding procession, three-year-old Prince George was a page boy and two-year-old Princess Charlotte was a bridesmaid. A feisty little bridesmaid at that, by the looks of things.

Princess Kate was also in charge of one of the most important duties at a wedding; she was the designated shusher of potentially unruly children.

And this is why the love story of Kate and Pippa Middleton is the sister fairy tale of our dreams. Because Princess Kate didn't arrive wearing a tiara and try to steal the show; she was in the background of her sister's wedding, getting s**t done. Letting her sister have her day in the sun.