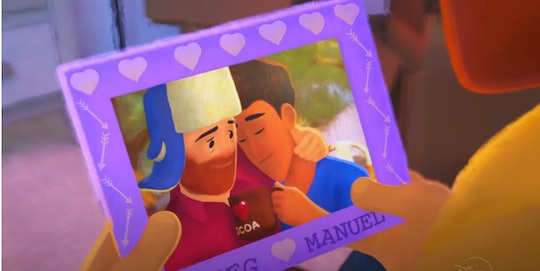 A beautiful story about one man trying to come out to his parents is told in Pixar's new animated short Out. Available now on Disney+, the nine-minute uplifting short directed by Steven Clay Hunter is based on a true story and even features a nod to another Pixar short.

Out follows the story of a young man named Greg who's in the process of moving out of his home with his dog Jim and his partner Manuel. He and Manuel are clearly very loving and kind with each other, but there is one issue — Greg hasn't told his parents about Manuel. Greg admits it's been difficult to tell them when the doorbell rings and his parents are there to surprise their son by helping him move.

Greg panics and asks Manuel to leave. "Tell them," Manuel urges Greg, who still doesn't appear to think his parents would understand, but then the dog steps in and helps him see the world through different eyes.

In true Freaky Friday fashion, Greg and the dog switch bodies accidentally. Pandemonium ensues, as you might expect when a human turns into a dog and vice versa, but one of the positive outcomes is that being inside a dog body gives Greg the chance to see his mom in a different light.

Ultimately, Out sees a lovely conclusion. One that should offer a bit of hope and positivity to LGBTQ kids who might be worried about how their families might react if they're honest with them.

And not only is Out a beautiful short, but Pixar fans will likely notice the nod to another emotional SparkShort, Kitbull, at the beginning and end of the film as a sweet little aside.

Out is now available to stream on Disney+.

More Like This
Netflix Has Lots For Families To Look Forward To This August
'Weird: The Al Yankovic Story' Is A Pitch Perfect Biopic Parody (Because Of Course It Is!)
All The Family Movies We’re Looking Forward To Seeing In 2022
12 Ways The Summer I Turned Pretty Is Different From The Book It's Based On