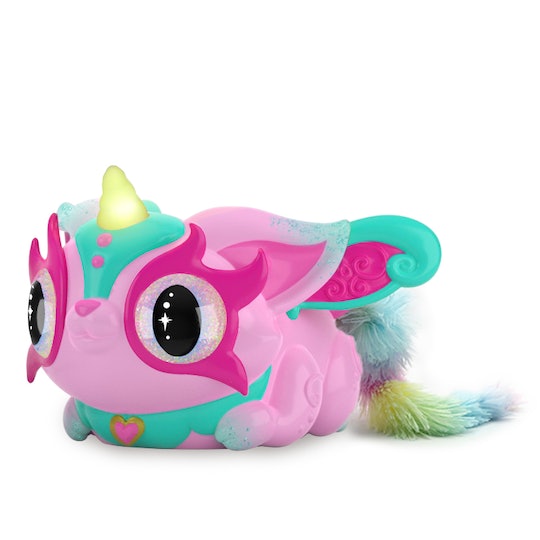 OMG, You'll Fall In Love With The Brand New Creatures From The Makers Of Fingerlings

The high-tech toy manufacturer behind Fingerlings is launching Pixie Belles and UNTAMED Legends Dragons, and these two new toys are super interactive and addictive. With so many fun features and ways to engage, it's almost impossible not to want to start playing with them. And if I'm saying that as a grown woman, you can only imagine how much kids are going to love these things. Basically, start planning your shopping strategy for the 2019 holiday season, because you know they'll be flying off shelves.

Designed for kids age 5+, Pixie Belles are palm-sized, pastel-colored critters that look kind of like a unicorn-rabbit-dragon hybrid. They have fuzzy detachable tails that can be worn as a bracelet or scrunchie, and that alone is something the majority of my daughter's preschool class would flip over. And since the Pixies come with magnetic "pods" that can clip onto your clothes, they're like fun, wearable sidekicks.

But that's just the tip of the iceberg. What makes Pixie Belles really unique is their ability to react to touch, motion, and sound. You can have a dance party with them (they know six different moves) or you can put them in 'spin mode' to watch them whisk around to the pace of your own sounds: clap your hands slowly and the creature will spin slowly; if you talk continuously, they'll just keep spinning.

Each Belle has a nurture mode, too. When you pet or give it kisses, the responsive creature coos or makes other sounds. And to top it all off, the Belle's horn changes color based on its mood.

These magical little creatures will be officially introduced to the world at the Toy Fair in New York this weekend, and then will hit retail shelves this August, priced at $15, according to a company spokesperson.

While Pixie Belles are sure to make waves, they're certainly not the only new toy that WowWee will be unveiling at this year's Toy Fair. UNTAMED Legend Dragon, the "newest, biggest, and baddest species from the UNTAMED world," according to a company spokesperson, will also be debuted this weekend.

Featuring head and neck sensors, and large motorized wings that flap when you guide it through the air (thanks to the built-in accelerometer), these fierce creatures are pretty technologically advanced. Similar to Pixie Belles and the current offerings from the UNTAMED collection, the Legend Dragons respond to touch and motion, and make plenty of ferocious sounds (growls, screeches, roars, etc.). The dragon-dinosaur-looking creature also comes with mood LED lights that let you know how he's feeling. A yellow light on his chest indicates he's hungry; a red light means he's angry (yikes!). The winged beasts are designed for kids age 5+ and will also be available for purchase in August, according to a company rep.

As part of the UNTAMED world, the Legend Dragon will join other beasts in the line-up, like the Fingerling dinosaurs.

These are the kind of toys that seem like they would have real staying power. As a parent, I might tire of the sounds, but if means that my kiddos are occupied in the car or in the grocery cart, I'm all for these new critters.