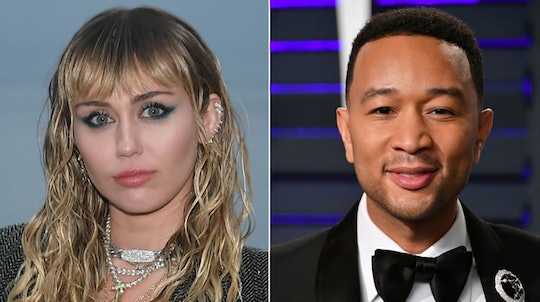 Nearly 140 musicians have joined Planned Parenthood's #BansOffMyBody campaign, adding a new layer of star power to the fight for accessible reproductive health care. The initiative is in response to the near-total abortion bans that were recently enacted across the United States, and its goal is to drum up further support for the pro-choice movement. I don't know about you guys, but I'm all about celebrities using their platform for good.

The social media-based initiative is "a grassroots campaign to fight back against attacks on reproductive health care and boldly declare that our bodies, our lives, and our futures are our own," according to the Planned Parenthood Federation of America. The ultimate goal is to inspire fans to add their name to a national petition calling for an end to the abortion bans, with a goal of collecting half a million signatures by the anniversary of Roe v. Wade in January 2020, according to Rolling Stone.

Alexis McGill Johnson, Acting President and CEO, Planned Parenthood Federation of America said in a statement about the movement: “Abortion access and reproductive health and rights are under attack like never before, and we need everyone to fight back. These bans do not represent the will of the American people, which is why so many powerful, diverse voices are speaking out against them,"

She continued, "Planned Parenthood is grateful to these artists for using their incredible platforms to declare that our bodies are our own — if they are not, we can never be truly free or equal."

So, why now? In just 2019 alone, more than 300 bills restricting abortion access were filed in states across the country, and states have enacted 26 bans on abortion, according to the Guttmacher Institute. As it stands, 1 in 3 women of reproductive age lives in a state where abortion could be outlawed if Roe vs. Wade is overturned.

But it isn't just about abortion rights — it's also about access to affordable reproductive healthcare and birth control options. This cause is especially important now due to the Trump administration's so-called "gag rule," which takes away federal funding from providers who refer patients to an abortion provider, according to Politico. And many organizations, like The Washington State Department of Health, are simply opting out of Title X funding rather than adhere to the new regulations. In fact, Planned Parenthood opted out of Title X funding in mid-August, stating it would wouldn't give up on its patients.

Many musicians who joined the initiative understand the urgency of its mission, with singer-songwriter Billie Eilish stating in a press release:

"I’m proud to be standing up for Planned Parenthood as they fight for fair and equal access to reproductive rights. We cannot live freely and move fully in the world when our basic right to access the reproductive health care we need is under attack. Every person deserves the right to control their body, their life, and their future."

Despite the fact that nearly one in four women will have an abortion within their lifetime, and 77 percent of Americans are in favor of keeping Roe vs. Wade in tact, women's reproductive rights have taken a huge hit in recent years, according to The Hill. Across the United States, in places like Alabama, Georgia, Kentucky, Ohio, Louisiana, Mississippi, and Missouri, reproductive rights are in danger thanks to a number of new abortion restrictions. Some bans don't include exceptions for rape of incest, and in some cases, doctors could serve up to 99 years in jail for performing an abortion, according to Amnesty International.

What's worse? Miscarriages could potentially be investigated as supposed coverups for illegal abortions, according to Amnesty International.

It might not seem like a big deal to some, but nearly 200 musicians banning together for one cause is certainly a huge feat. And this campaign is just another shining example of Planned Parenthood's commitment to the fight for accessible reproductive health care.