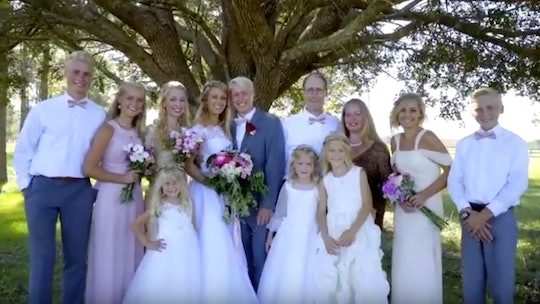 If you're a TLC fan, then chances are you've caught an episode or two of the network's new series, Welcome to Plathville. Like most shows on the quirky network, this series focuses on a highly unique family, the Plaths. This extremely conservative family of 11 is apparently also a seriously sheltered one, so some might assume Plath family Instagram accounts don't exist. But, as it turns out, a few members of the interesting brood are pretty active on social media.

The Plaths have managed to shelter their kids to the point where they've been exposed to very little technology over the years, know hardly anything about pop culture, and have never even tasted a carbonated soda. "We’ve structured our lifestyle here so that we can retreat to our piece of heaven on Earth,” Barry said in a sneak peek of the TLC series. "We have limited technology," Kim explained. "We have limited computers. They don't play any video games."

Of course, Barry and Kim's kids eventually grow up. Their oldest daughter, Hosanna, and oldest son, Ethan, are both adults and married — and have therefore been exposed to life outside of "Plathville." And their 16-year-old daughter, Moriah, seems to have some strong opinions about her parents' philosophies. "Nothing against my parents, but you know, I don't agree with everything they say and think," she declared in TLC's promo video.

Given all of this information, I started my hunt for a Plath Instagram account. I half-expected to find Ethan and Olivia, given that the oldest Plath son's wife has introduced him to the finer things in life — like his first sip of Coke, and his first gym workout, as the TLC sneak peek showed. Or Hosanna and her husband, since they travel the country playing gospel music. Or even rebellious Moriah. And alas, some of them seem do indeed exist on Instagram.

As for Hosanna and her husband, they do not appear to be on Instagram, unless they use an alias, of course. Their website's contact information doesn't link out to any social media platforms, so it's likely they're simply not on Instagram.

Meanwhile, 18-year-old Micah Plath is also on Instagram, @micahplath, where he shares videos of himself exercising and hanging out on the farm.

Additionally, 16-year-old Moriah Plath, @moriah.jasper, also appears to be active on Instagram. Her most recents posts were of her hanging out with her brothers, Micah and Evan.

Searches for "Barry Plath" and "Kim Plath" came up fruitless, however, I did manage to find Kim Plath on Facebook, if that's your cup of tea. She doesn't share publicly very often, with her last post shared in June. And the Plath family appears to have a Facebook page as well.

It seems many members of the Plath family are perfectly fine being MIA on Instagram. But who knows, perhaps more will join now that Welcome to Plathville has taken off or, later on, when more of the Plath siblings reach adulthood. Even without social media, if you're as intrigued by the series and the family behind it as I am, be sure to catch up on their happenings when Welcome to Plathville airs on TLC on Tuesdays. You can also catch up on the first episodes now on TLC's website.

This article was originally published on November 2, 2019