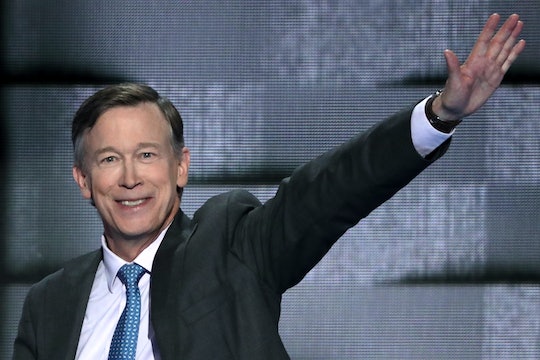 'Pokemon Go' Mentioned At DNC, Proving Democrats Are Eager For The Youth Vote

Did Colorado Gov. John Hickenlooper just become the hippest guy at the DNC? Probably not. But he was trying, Lord love him. You've got to give him credit for trying. Hickenlooper just mentioned "Pokemon Go" at the DNC and either pissed everyone off or got a bunch of 12-year-old interested in rocking the vote. It's still too soon to tell.

In his speech to endorse Democratic Presidential candidate Hillary Clinton, Hickenlooper urged viewers to "put down the "Pokemon Go" and get out to vote. Which got me to thinking... how many Pokemon are there at the Wells Fargo Convention Center in Philadelphia? According to NBC News affiliate 12News.com, the Pokemon are plentiful. As are the "Pokemon Go" Pokestops and the "Pokemon Go" gyms. No official word yet on the quality of the Pokemon available at the DNC, but if Hickenlooper is telling everyone to put down their "Pokemon Go" I'm thinking they're pretty amazing. I'm also sort of assuming they are of a more distinguished quality than the possible Pokemon at the RNC, and don't read anything into that. It's just a feeling I get. At the DNC I'm seeing Squirtles, Mewtos, the whole shebang. Security is pretty tight around the area, understandably, but it certainly didn't stop the Pokemon from getting through. And now I'm also suspicious that Hickenlooper has a hidden agenda... he wants to "catch 'em all" for himself.

A few pertinent questions for Hickenlooper (and dare I suggest, Clinton herself?) after the DNC comes to an end; Do you "Go"? What level are you at (although it would be a little passe for them to share their "Pokemon Go" trainer level with the world like that, tacky!), and lastly, are you Team Mystic? Because Team Mystic is the best. Team Valor, I am sorry to tell you, is for plebs.

You opened up this can of worms, Hickenlooper. You have no one to blame but yourself.