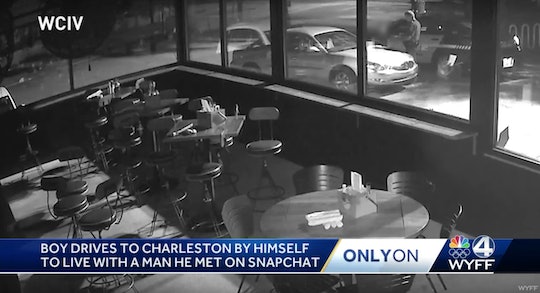 When you're a parent, your imagination is a terrible thing. It's the monster in the closet — except it's not in your closet, it's in your child's closet and you're always terrified of what could happen. Sometimes you tell yourself you're being overly paranoid when you worry, but after hearing that police have issue a warning after an 11-year-old boy drove 200 miles to meet a stranger he met on Snapchat, you're reminded that there's no such thing as being overly cautious when you have kids.

A police officer in Charleston, South Carolina was patrolling the streets after midnight on Monday when he pulled up beside a car being driven by a child, according to a news release issued by the Charleston Police Department on Sept. 24. The officer saw the boy was alone in the vehicle and thankfully looked into the situation. The young boy told the officer that he had just driven three hours from Simpsonville, South Carolina to go live with a stranger he met on Snapchat, the department's statement noted.

The boy had taken his brother's vehicle and driven the entire way himself in the middle of the night, but the GPS signal with the address he had kept on his father's tablet had dropped and he had gotten lost, the statement said. The young boy's father was called, apparently right around the same time he had realized his son was gone, and the two were reunited. Unfortunately, according to the Charleston Police Department, the Snapchat conversation had disappeared, so police are still looking at the tablet the boy was using to find out the identity of the man who invited this young boy to drive 200 miles to live with him.

It's a chilling thought that any stranger out there could lure a child to put themselves into this kind of danger, and Charleston Police Chief Luther T. Reynolds wants parents to see this as a cautionary tale. In a statement to Live 5 News, Reynolds urged parents to talk to their children about the dangerous possibilities of social media.

"I would love tonight, right now, anybody who's watching this, who is a parent of a child, especially an 11-year-old, to sit down with your 11-year-old, right now, right this moment and have a conversation about what you're doing on social media, the dangers, the benefits and things that as a parent we need to talk about every day," Reynolds told Live 5 News.

The reality is that our kids are going to use social media, there's simply no getting around it. In fact, a survey conducted by CNN noted in 2018 that 56 percent of children from parents who responded had their own social media accounts, and that 23 percent of kids between the ages of 8 to 12 were regular social media users. The average age of a child when they initially sign up for social media platforms like Snapchat, Instagram, and Facebook was 12.6 years old, according to CNN's survey. While Snapchat has a list of safety guidelines for users, it does tend to fall to parents and guardians to keep kids safe. (Romper has reached out to Snapchat for comment regarding this incident.)

Yes, it is terrifying to think about all of the dangerous positions they could be putting themselves in when they're drifting around online. But perhaps, as Kids Health from The Nemours Foundation recommends, keeping the lines of communication open and engaged about those dangers is a parent's best defense against all of those murky possibilities. Remind them that you are there for them, that you're in their corner no matter what, and that their safety is your number one priority. That they are your number one priority.