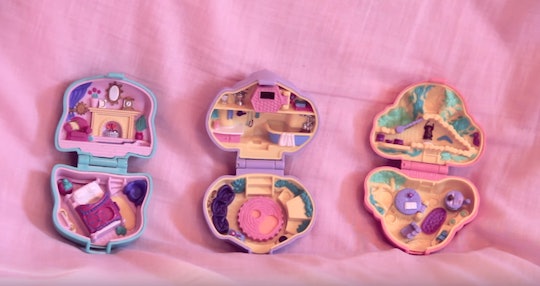 Last month, I reported that some people have made bank off of selling vintage Polly Pocket toys on eBay. At the time, I lamented the fact that I no longer owned any of my Polly Pockets — those miniature compact toys from the 1980s and 1990s that every kid shoved in their jean pockets before heading off to school in the morning. Toy maker Mattel discontinued the original Polly Pocket line two decades ago, shattering the hearts of children everywhere. But never fear, all-grown-up '90s kid: Polly Pockets are officially coming back. That sound you're hearing? That's your bank account draining of its contents, because while the revamped toy is sure to be affordable — the original Polly Pockets sold for $10-20 — every '90s kid turned millennial mom is going to want to buy them all.

So when will Polly Pocket make its comeback in the United States? In June, selling in toy retailers nationwide, according to BuzzFeed. But don't expect the same Polly Pockets you knew and loved as a kid: Mattel is giving the new collection of tiny, less-than-an-inch dolls a makeover. The Polly Pocket dolls will be slightly larger than the original line from the '80s and '90s, but still live in their classic compact homes. Mattel will also keep Polly Pocket's colorful theme, but modernize the outfits and look of the dolls, BuzzFeed reported. Call it the ultimate glo-up.

By the looks of it, the new Polly Pocket line will be just as fun as the toys from your childhood. Polly will play a rock star, have an awesome scooter, have a cute-as-a-button dog, hit the slopes, spend time at the beach, go on undersea adventures, do pretty rad 360-degree toe flips on a skate board, and even have her own limo, according to Cosmopolitan. Seriously, the new Polly Pocket line will have it all.

A spokesperson for Mattel told Romper in an email that, with the Polly Pocket relaunch, the company hopes to "introduce a new generation to the world of Polly to amplify her story to modern fans." A marketing campaign will support the line's comeback, with the hopes of "inspiring girls to be capable, courageous, and tenacious in their own lives," just like Polly Pocket, the spokesperson said.

For those of us who are die-hard Polly Pocket fans, a relaunch of the original line is so freaking exciting. It's not that Polly Pocket disappeared completely from the international market. When multinational toy manufacturer Mattel bought British company Bluebird Toys in 1998, the original Polly Pocket maker, it discontinued the original line and relaunched a whole new version of Polly Pocket that flopped, essentially, according to Scary Mommy. But there's still a website dedicated to the tiny doll and her friends, as well as a Polly Pocket YouTube channel.

Is it so surprising that '90s kids everywhere are going wild over the relaunch? No, when you consider the original line's popularity over the decade that it was on the market: More than 10 million O.G. Polly Pocket toys were sold before Mattel discontinued the series in the late '90s, according to the Mattel spokesperson. More than 10 million in a 10-year period.

And there's obviously a thirst for vintage Polly Pockets among collectors and everyday people alike. As I reported last month, Polly Pockets have sold for as much as £1,421 on eBay in the United Kingdom, with other Polly Pockets selling for around £700, according to The Sun. Convert that to U.S. dollars, and that's as high as $1,926 and as low as $950. Peruse the U.S. eBay site, and you'll find similar price tags for old Polly Pocket toys.

I won't lie: I wish I kept my original Polly Pocket toys from my childhood to pass down to my son. I would have loved to share something with him that made me so happy as a kid. But now that there's a new reiteration of the classic beloved toy, you bet your bottom-dollar I'm shelling out money for it.