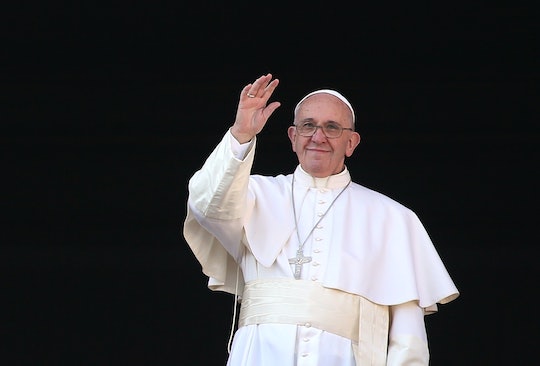 Pope Francis Says Women Can Use Contraception If At Risk For Zika, & It’s A Huge Deal

In a landmark announcement that contradicts the usual stance of the Catholic Church, Pope Francis said women can use contraception if at risk for Zika to avoid having children with birth defects linked to the disease. The Catholic Church has long held the opinion that any contraception is sinful, no matter the circumstances, so this move is important — and extremely necessary — for Catholic women in South America.

Many church leaders in Zika-infected countries, mainly in Latin America, have maintained that the disease does not justify an exception to their beliefs. Francis' comments have changed all that. The Zika virus has been linked to an increasing number of cases of microcephaly, a development condition that causes infants to be born with abnormally small brains. As more and more health ministries have advised women to avoid getting pregnant for up to two years, and as the number of cases grows, Francis is urging Catholics, and the Catholic Church, to heed those warnings. No matter how contradictory this message is, the Pope is seen as an infallible authority.

According to the Wall Street Journal, Francis said, “Avoiding pregnancy isn’t an absolute evil, and in certain cases such as this one, as in that one I mentioned of Blessed Paul VI, it was clear." Francis did clarify that the church's stance on abortion would not change, despite the Zika epidemic, just it's stance on contraception. He suggested that there is a moral difference between abortion and preventing pregnancy.

Francis made his statement during a press conference immediately after his trip to Mexico. He told reporters, "abortion isn't a lesser evil, it's a crime. Taking one life to save another, that's what the Mafia does. It's a crime. It's an absolute evil."

Francis referred to actions taken by Pope Paul VI in the 1960s. Apparently he approved the use of contraception for nuns in the Belgian Congo who were being raped. During his career, Francis has been much less direct about many topics of sexual ethics. He once said the church shouldn't be "obsessed" with such issues. Similarly, he neither championed nor forbade the use of condoms in Africa to prevent AIDS, but instead said there were bigger issues to deal with, like exploitation and malnutrition.

While his condoning of contraceptives in Latin America was only suggested, he was quite direct about the need for a Zika vaccine. "This needs to be worked on," he said. He is the first Latin American pope, so his recent visit to Mexico and Central America was particularly important for him and for those countries, many of which have some of the largest Catholic populations in the world. The Pope's comments are necessary for predominantly low-income women in Zika affected countries, who have been told not to get pregnant, but haven't been provided with any resources to do so.