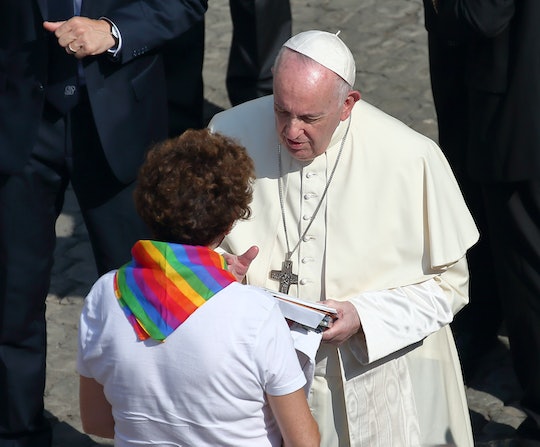 Pope Francis Tells Parents Of LGBTQ+ Children To "Love Them"

After century upon century of discrimination, the leader of the Roman Catholic church continues to try to make positive changes. And the Pope's recent message to parents of LGBTQ+ children affirmed his stance that children are all loved by God.

Pope Francis has made a name for himself as a groundbreaking leader of the Roman Catholic Church since his appointment in 2013. He is the first non-European pope to be appointed, hailing from Buenos Aires, Argentina. And during a meeting with 40 parents of LGBTQ+ children in Rome, he continued to preach love.

On Wednesday, according to Religion Digital, Pope Francis spoke with parents who were gathered as part of a faith-based LGBTQ+ parental support group Tenda di Gionata, or Jonathan's Tent. One parent who was there spoke to Pope Francis about the fact that his son felt he would have to leave the church as a member of the LGBTQ+ community, while others reportedly spoke of their struggles to make a connection between their faith and their love for their children.

Religion Digital that Pope Francis responded with this simple, beautiful sentiment: "The Church loves your children as they are, because they are children of God.” And with that statement, Pope Francis offered families of LGBTQ+ children unequivocal support in loving them just as they are.

This isn't the first time Pope Francis has spoken out in support of the LGBTQ+ community. Not long after his appointment to the papacy in 2013, he was being interviewed on a return flight to Rome from Brazil where he had been attending World Youth Day. When he was asked about the possibility of members of the LGBTQ+ community joining the clergy, according to New Ways Ministry, he said, "If someone is gay and he searches for the Lord and has good will, who am I to judge?” That same year he also asked members of the church to "show mercy, not condemnation" to the gay community, a seismic shift from previous papal administrations, according to Human Rights Campaign.

Catholic members of the LGBTQ+ community have spent years being forced to make a horrible decision: leave your faith or hide who you are; A Pew Research Center study from 2015 found that many LGBTQ+ people felt unwelcome in the church and were significantly less likely to identify as Christian. One statement from Pope Francis will not undo centuries of hurt, but hopefully it will offer Catholic members of the LGBTQ+ community a way forward.