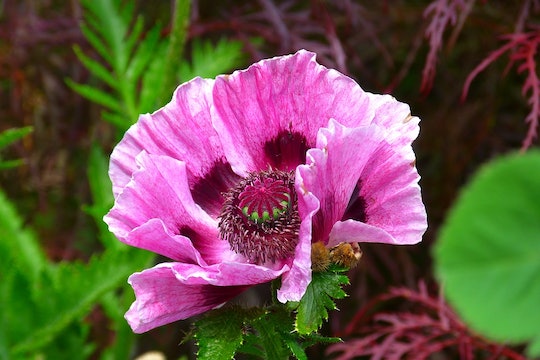 Women suffering from infertility often travel a lonely road. A road populated with other people's children and their own struggles to have a baby. Not every woman wants to be a mother, but for those who do and are robbed of the opportunity to carry a child at every turn, it can feel unbearable. There are options, of course, including expensive fertility treatments that are not always an option for every budget. Fortunately, there might be new hope on the horizon. New research has found poppyseed oil may solve infertility problems in some women.

According to a recent report by Stat News, a new randomized study of 1,000 women found that flushing the fallopian tubes with poppyseed oil greatly increased a woman's chances of conceiving. Study authors noted that, for many decades, women who were struggling to conceive would often find themselves pregnant after having an imaging study done to look at their uterus and fallopian tubes. The X-ray, called a hysterosalpingogram, utilized an oil-based injected contrast fluid to get a clearer picture as far back as the 1920s, according to Dr. Catherine Spong of the Eunice Kennedy Shriver National Institute of Child Health and Human Development.

In recent years, this oil-based fluid has been replaced by a water-based one. Researchers in the Netherlands decided to look at 1,000 women in 27 hospitals, giving some of the women a poppyseed oil-based fluid during their procedure and the other women the commonly used water-based fluid. The results were encouraging.

Dr. Ben Mol, one of the study's lead authors and a professor at the University of Adelaide, found that the women who used poppyseed oil got pregnant 40 percent of the time, a full 10 percent more than the women who used the water-based fluid. "I was surprised by the magnitude of the effect," Mol said. "It’s so clear."

Study authors reported that many of the women who used poppyseed oil were pregnant within a month. It should be noted that the women in the study were all under the age of 40, and that it was not fully made clear why exactly the fluid aided fertility. One of the many causes of infertility are blocked fallopian tubes, and Dr. Mol suggested in New Scientist that it could simply be that oil is better than water for flushing the fallopian tubes. Which means that poppyseed oil could help, in certain specific circumstances and shouldn't necessarily be considered a "cure-all":

If you know your infertility is due to poor semen quality or no ovulation then this is not going to help, but if there’s any other cause this might be beneficial. It’s really cheap compared with IVF.

Dr. Mol knows a little something about the positive effect of poppyseed oil. He believed that both he and his brother were born because his own mother, after trying to conceive for eight years, had her fallopian tubes investigated in this manner. It may seem like a strange phenomenon to some, but to women struggling with infertility, any news is good news.