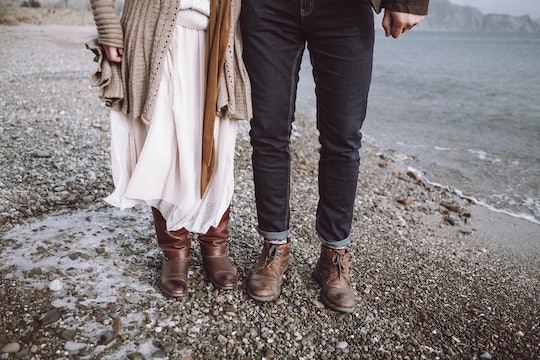 For many of us, sharing on social media is among the very first impulses we have after something big happens in our lives. That social norm is reinforced by Facebook’s “Life Events” feature, created in 2011 as a means of getting users to share their personal news (and, naturally, data). Users are given the choice to write in their own life event or choose from the list of various template options, like “ended a relationship,” “new pet,” “broken bone,” “published book or paper,” “bought a home,” and “overcame an illness.” Having recently written a new paper on the topic, social stigma researcher Nazanin Andalibi thinks it’s worth nothing that “experienced a pregnancy loss” is not among the given options.

“The way these social media platforms make these decisions about what to acknowledge as a life event by default (and what not to) can influence, in a sense, what’s considered appropriate to talk about and what’s not on these platforms,” she tells Romper.

“For everyone I talked to, it was a life event. It was a very important part of their life. Some people referred to it as the most difficult thing they ever had to deal with. For it to not be acknowledged in the design says something.”

Despite being incredibly common — as many as one in five pregnancies ends in pregnancy loss — our culture does not have any grief rituals or practices for it.

For her new paper, which will be presented at this year’s Association for Computing Machinery’s Computer-Human Interaction Conference, Andalibi and her colleagues at Drexel University conducted in-depth interviews with 27 women between who had experienced a pregnancy loss within the past two years. The paper’s subjects fell between the ages of 27 and 42. Out of the 90 people initially surveyed, 36 of them said they hadn’t disclosed on any platform whatsoever.

Despite being incredibly common — as many as one in five pregnancies ends in pregnancy loss — our culture does not have any grief rituals or practices for it. This, Andalibi says, reveals itself in the myriad ways those who have experienced it choose to use (or avoid) social media in talking about their experience.

On a forum for discussing miscarriage on a popular fertility tracking app, there’s a consistent theme in the way its users share their histories with pregnancy loss:

“Thank you so much for reading my story and sorry it’s so long,” one woman wrote last month. “I just needed to get it all out because it’s been building up for so long.”

“Sorry for babbling but I needed to rant to someone because… I have no support,” another shared.

These posts reflect the impetus of the anonymous disclosures Andalibi focused on within her paper. Many of the interview subjects mentioned using online forums like Reddit and BabyCenter to speak freely and find support from others with similar experiences. And while it may seem surprising that many of the women chose to reveal this traditionally private and major life event with strangers, it actually makes a lot of sense.

The first time she chose to write about her own experience miscarrying at 15 weeks, she did so anonymously.

Dr. Jessica Zucker, a psychologist and writer who specializes in women's reproductive/maternal mental health, has written prolifically about pregnancy loss. But the first time she chose to write about her own experience miscarrying at 15 weeks, she did so anonymously. It was just three months after the tragic and traumatic event in which she had to deliver her already-deceased daughter alone in her home.

“These days I don’t feel constrained by using my actual name,” she tells Romper. “When I wrote the anonymous piece I was still processing the trauma, the pain, the shock. I think I felt relieved to be so straightforward about my experience but also nervous to put it out in the world. Knowing my name wasn’t attached provided the privacy I needed then.”

In the five years since, Zucker has spearheaded various projects dedicated to fighting the stigma that surrounds pregnancy loss. Among them is an Instagram account called “I Had A Miscarriage,” which she uses to share stories of others who want to come out and share their stories, both anonymously and by name.

As was the case with Zucker, women who participated in Andalibi’s study said they saw opportunities to talk about their loss anonymously as a kind of bridge to sharing on other social media platforms.

“Reddit and BabyCenter helped, to some extent,” Andalibi explained. “But although they were helpful and important for many, they often weren’t enough. People still felt the need to be able to talk about their experiences with others that they somehow knew that weren’t completely anonymous strangers on the internet.”

Another reason that some chose to share was to avoid painful future conversations concerning the loss — particularly for those who had already disclosed the pregnancy on Facebook.

When it came to revealing a pregnancy loss on Facebook in the immediate aftermath, there was a multitude of factors contributing to the respondents’ decision.

For many, the desire for catharsis served as a powerful motivator to share. Writing a Facebook status about their grief served as a means of working towards acceptance.

“I didn’t want it to fester,” one participant said. “I wouldn’t have been able to move on with my life if I didn’t get it out there.”

Another reason that some chose to share was to avoid painful future conversations concerning the loss — particularly for those who had already disclosed the pregnancy on Facebook. The option to share with one’s network all at once also enabled people to option to avoid having to tell their story over and over. These personal considerations (and others) proved incredibly powerful for many of the women who chose to speak out as they were experiencing the loss.

As researchers of social stigma, Andalibi and her colleagues were particularly interested in what motivated those who had perhaps kept quiet initially eventually break their silence.

The first large-scale social media campaign and simultaneous disclosure of Zucker’s — a New York Times essay titled “Saying It Loudly: I Had A Miscarriage” — occurred on a day that holds a special place in the heart of many members of her community: October 15, Pregnancy and Infant Loss Remembrance Day.

What Andalibi found is that this particular day (as well as the larger month-long awareness campaign held in October) played a vital role for many when it came to sharing their stories after the fact.

“Social media campaigns that encourage women to share their own stories about pregnancy loss provided a safer space for those who might not have disclosed otherwise at all,” she said, adding that it also helped them feel connected to a larger cause and mission.

Even beyond the month of October, some of those who shared with their networks said they saw their own disclosure as a means of activism fighting a pervasive and harmful stigma.

This type of sharing underscores a phenomenon Andalibi termed “network-level reciprocal disclosures” in her paper. Simply stated, this means that the “IRL” way humans tend to share intimate information after being told similarly personal information also occurs online, even when the disclosure isn’t directed solely at them. Because of this, Andalibi feels strongly that it may behoove social media platforms to help facilitate these important conversations.

Adding “Lost a pregnancy” as a default Life Event of Facebook would certainly be a start, she says. But even beyond that, Andalibi believes there are ample opportunities to encourage these kinds of meaningful interactions. Other areas she says she’s interested in exploring include social media features that provide a way to disclose their loss anonymously, or a way to give users an estimated occurrence of pregnancy loss in their network based on demographic information. Maybe, she thinks, there's a way to take all the data users contribute — while happy, while heartbroken — and make people feel a little less alone.