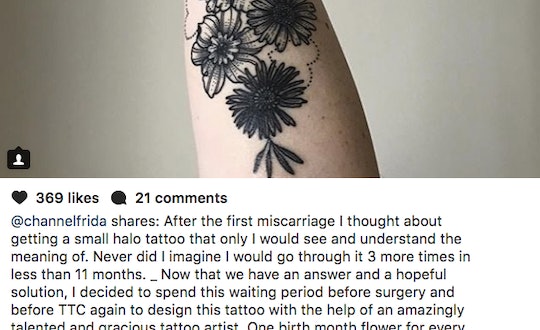 According to the American Congress of Obstetricians and Gynecologists, miscarriage rates for women ages 20 to 30 range anywhere from 9 to 17 percent, with the rates increasing as a woman gets older, with rates approaching 40 percent at age 40. Miscarriage is surprisingly common, and yet still remains an experience shrouded in secrecy, shame, and embarrassment. That's what makes this mom's viral Instagram account about pregnancy loss so important, as her beautifully raw posts seek to validate the experience of miscarriage and pregnancy loss for so many hopeful parents.

When Jessica Zucker was 16 weeks pregnant with her second child — a month past the first trimester when pregnancy loss is at its greatest risk — she suffered a miscarriage, according to Metro. "I had a second-trimester miscarriage. That is a fact of my life," she wrote in a recent Instagram post. Zucker continued:

I have no shame. No self-blame. No guilt. I did nothing wrong. I did nothing to deserve this. My body works. I don’t feel it failed. I embrace my grief fully and allow it to wash over me. I grieve still.

Zucker turned her grief into a movement: What began as a social media hashtag — #IHadAMiscarriage — has now become its own Instagram account with more than 13,000 followers.

Zucker described her traumatic pregnancy loss in 2012 to Self. At 16 weeks, she began spotting. She delivered her baby at home by herself — even having to cut the umbilical cord — before she began to hemmorage. Her husband came home and rushed her to the hospital, where she underwent a D and C to remove the placenta. Zucker said, "Two hours later I went back to my house and was no longer pregnant. That was pretty much the most profound thing that ever happened in my life. The most traumatic."

The posts at the @IHadAMiscarriage Instagram account are beautifully composed, often sharing the stories of women who have experienced miscarriages. Some have gone on to successfully have children — a terrifying experience in its own right in the wake of pregnancy loss — while others choose to pause and even end their family building journeys following such a loss. Zucker posted one such painful story of a woman from Connecticut: "Deciding not to have another baby was the only way I could garner some control over all that happened to me over the past year."

Zucker wrote a powerful piece for The New York Times Motherlode blog in 2014, in which she expressed why starting the #IHadAMiscarriage hashtag that would become her Instagram account was so important — it wasn't about being "proud," but rather letting other women know they aren't alone not just in the physical experience of pregnancy loss, but in the devastating emotional experience that can follow as well.

We shouldn’t feel ashamed of our traumas, nor should we hide the consequent grief. It’s not that I necessarily feel proud of having a miscarriage, but I do feel compelled to question why it seems as if we rarely talk about pregnancy loss, though the statistics are staggering. Is it resounding cultural shame? Speckles of self-blame? Steadfast stigma? The notion that talking about “unpleasant” things is a no-no? It’s a hard topic. But if every woman who has lost a pregnancy to miscarriage or stillbirth told her story, we might at least feel less alone.

While the exact circumstances and experiences of pregnancy loss differ vastly from one woman to another — and even to the same woman, in the case of recurrent miscarriage — the deep well of grief and the longing for normalcy to return is universal. Zucker's pregnancy loss Instagram account only amplifies the experience so that those who are grieving find validation, hope, and comfort.