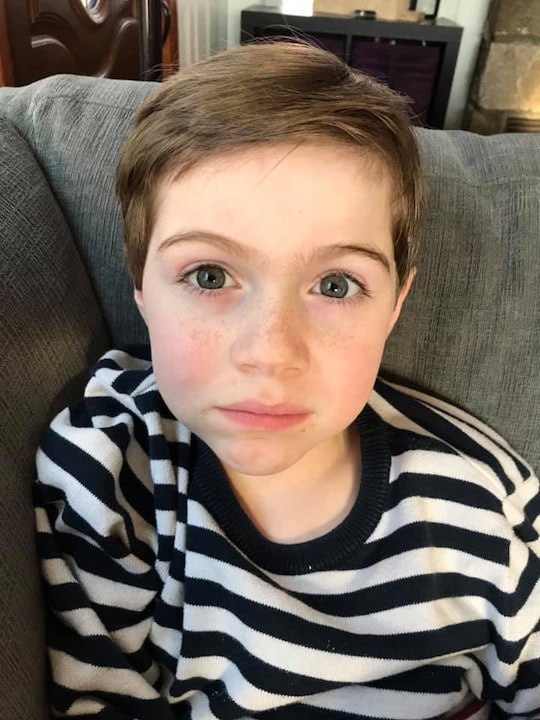 Here's Why You'll No Longer See Pictures Of My Son Online

These days, if my 7-year-old had a catchphrase, it would be, "Delete it at once!" As in, "Did you just take a picture or video of me? I do not consent." This is why you won't be seeing my son as much on social media. But while I've made this decision in consultation with my son, it's not as cut and dry as one might think.

Like the vast majority of 21st century babies, my son has been photographed more or less every day of his life. He's used to the view of mommy or daddy smiling at him lovingly through their phone as they snap a million pictures. But as he gets older, he's more and more aware of what it means to have a photo taken... chiefly the fact that images of him are shared with others on assorted platforms. And sometimes that is not something he's OK with.

But I have to be honest, when my son tells me to delete a picture or video immediately, I usually don't delete it. I just take the spirit of his demand seriously and I do not share that image with a larger audience. But delete it? No way. I believe that, as a mom, I am entitled to some photographs of the fruit of my loins. (I have gotten into more of a habit of asking if I can take his picture before I do it, though.) But no, I don't share the picture or video in question on social media, because I do believe that when children are old enough to show a strong opinion about their own person they deserve to have those opinions at least considered.

I don't post everything my kids have ever done on social media, but I'd be lying if I didn't admit to being a steady, regular sharer. My various friends and followers are familiar with my kids' exploits and images. But despite accusations regularly lobbed at millennial mothers, I'm actually very thoughtful about what I do post. I've always had personal rules about what I share about my kids. Funny things they say? Yes. Moments of genuine distress? No. School pictures? Yes. Pictures that show their butts? No. As time's gone on, my son's personal rules (though those standards have more to do with caprice than philosophy, if we're being honest) have been more conservative than mine, and I've respected his wishes. As such, people who have grown accustomed to seeing my son pretty regularly are seeing less of him online. I've not only made peace with that, but I respect it as The Right Thing For Me To Do.

Some parents avoid the issue all together and never share photos, or even stories, of their children on social media. "Dara," a mother of two, has made it a policy never to share her child's face on social media. "The internet is forever," she told Romper. "I don't think it's fair to have years of content of my children for anyone to see without their consent. Even if they're a child, I believe they have a right to privacy if they want it, and the right to be responsible for their own social media footprint."

Communicating about motherhood via social media, which necessarily includes at least mentioning children, has been vitally important in how I process it.

And some of those kids, who have lived their whole lives in their parents' social media accounts, agree. And they're speaking up. In a viral article for Fast Company, eighth grader Sonia Bokhari expressed the distress she felt about discovering that her mother and older sister had been posting photos and stories about her for her entire life without her knowledge. "When I saw the pictures that she had been posting on Facebook for years," she wrote. "I felt utterly embarrassed, and deeply betrayed." The experience prompted her to eschew social media all together. "It may be a dramatic move to be 13 and choose to completely opt out of social media, but my experiences with my family and the warnings and horror stories I heard at school were enough to convince me that I’d rather stay sheltered from this part of the internet for now."

Because I think the alternative is, to quote Bokhari, "a dramatic move."

Like I said, this entire discussion has arisen based on the fact that my son is requesting a smaller social media presence and I want to honor his wishes. At the same time, I'm not going to skip everything because maybe one day someone might find a picture or a quote from him and his tween self could possibly be embarrassed. Do you know what tweens find embarrassing? Literally anything. We should take their feelings seriously, but I also don't think we should be hinging interpretations of what's appropriate on their sensibilities years before they hit the Age of Humiliation. Tweens are absurd and self-important in a way that only they can be; in a way that's endearing and worthy of a massive eye-roll.

There's also a positive side to the "eternal documentation" aspect of social media: the history-buff in me is grateful for an easily accessible, running log of a my life and interactions with others. Pictures of me as a child exist in boxes in my parents' basement. There are entire years missing. Pictures of the last decade of my life — including my children growing up — are in the palm of my hand. Social media is the only baby book I've ever really filled out. When I'm feeling sentimental I can scroll through old photos and get a little weepy and reflect on how far they've come. And how far I've come.

Motherhood can be isolating, too, and even when it's not it's damn hard. Communicating about motherhood via social media, which necessarily includes at least mentioning children, has been vitally important in how I process it.

I live very little of my life in black and white, and social media is no exception.

In a hotly debated article in The Washington Post, Christie Tate addressed the fact that her daughter wasn't too pleased to discover just how much Tate had written about her without her knowledge. But, Tate explained, she wasn't going to quit posting about her child entirely. "I’m not done exploring my motherhood in my writing. And sometimes my stories will be inextricably linked to her experiences. Promising not to write about her anymore would mean shutting down a vital part of myself, which isn’t necessarily good for me or her. So my plan is to chart a middle course, where together we negotiate the boundaries of the stories I write and the images I include. This will entail hard conversations and compromises. But I prefer the hard work of charting the middle course to giving up altogether — an impulse that comes, in part, from the cultural pressure for mothers to be endlessly self-sacrificing on behalf of their children. As a mother, I’m not supposed to do anything that upsets my children or that makes them uncomfortable, certainly not for something as culturally devalued as my own creative labor."

This middle ground, I feel, is an uncharted fertile valley — a place to have actual, regular, productive discussions with our children about boundaries, comfort, and life online. The alternatives, while well-meaning, seem to shut down conversation all together.

I live very little of my life in black and white, and social media is no exception. I think there's a balance to be struck between respecting a child's right to privacy and being able to share my life with my chosen online audience. Insofar as my son will figure into it is an ongoing discussion between my son and me that I look forward to having, and, yes, he has approved every use of his likeness for this article.

More Like This
Prince George Reportedly Got Sassy In A Fight With A Classmate
16 After-School Snacks For Hangry Kids
Tips For Apple Picking With Kids
What Is RSV?