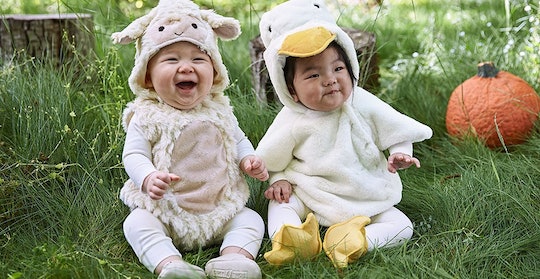 The Cutest Pottery Barn Kids Halloween Costumes Are 40% Off, But Don't Delay

We’re zeroing in on All Hallows’ Eve, and whether you’re planning on trick-or-treating with your child or not, chances are they’ll be wearing a costume come October 31 (even if that means unwrapping bite-size Twix in an Elsa wig in the living room instead of on the streets). Thus the race to secure a quality costume has begun. You could opt for any number of websites or DIY it, but if you’re looking for a deal on a well-made set of fairy wings or a darling dragon that will last for many dress-up sessions to come, Pottery Barn Kid's Halloween costume sale is the place to go.

For a limited time only, PBK is slashing prices on costumes that typically go for as much as $99 costumes to as little as $23.99. (I personally attempted to convince my son to go for Pottery Barn’s green dragon costume. (Sadly, he opted for a snow leopard from another site, much to my chagrin.)

Maybe you’ll have better luck with your kids, especially when they get a look at the variety of costumes available. There are the classics, like a light-up toddler bat costume (marked down to $47 from $79), a glow-in-the-dark puffy ghost (on sale for $41 from $69), and Disney princesses including a sparkly toddler Elsa dress (originally $99, currently $59) and a light-up Belle princess dress (originally $129, now $77). But Pottery Barn doesn’t stop there. It knows parents are looking for unique options or trying to satisfy a kid's impossible to understand costume description. That’s why there's also a Paw Patrol Rubble costume, light up 3D rocket costume, and a Wonder Woman costume for kids or toddlers (all originally $89, now $53).

How long delivery will take depends on where you live, but from what I can tell, they’re trying to ship these looks out within a week. Still, better act fast. These costumes are only on sale for a limited time, and chances are these great deals will be gone faster than you can say "Boo!"