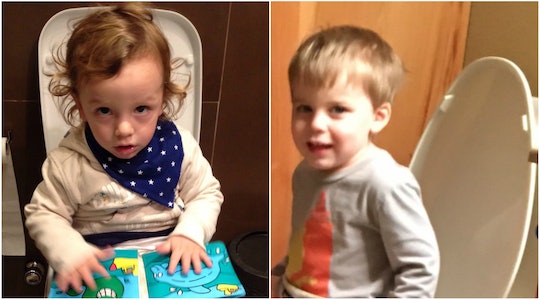 No One Tells You Potty Training Will Be An Emotional Rollercoaster

We're potty training our son. I should probably edit that some — we are lightly potty training our son, meaning we are weaning him off diapers but not yet putting him in underwear. We're placing him on the toilet as often as he's open to it, and rewarding him when he gets something in. When poop happens, there is joy — for us as parents, as well as our son. We are now on the emotional rollercoaster of the potty-training parent: our feelings wax and wane with the tides of our son's bowels. His wins are our wins. It's a rite of passage every parent goes through, yet one that remains under-explored.

I spoke with Dr. Elizabeth Gaebler, a psychologist, on the subject. She says potty training can be a very stressful experience, particularly if you try to rush your child. "Every child trains at their own pace and sometimes when that pace doesn't match your timeline or expectations as a parent, it can turn into a frustrating experience," she tells me. "For many parents, it can be hard to handle the fact that meeting this developmental milestone is mostly out of their control."

The lows are, well, low. But the highs can be ecstasy. A friend of mine put it well. "My heart leaps for joy every time [my daughter] goes potty. She jumps up and says, 'I did it!' with such a proud face and a huge smile. It's an awesome feeling, watching your child gain independence and grow," she tells me. "It is also a little bittersweet knowing that she is my baby and is growing up so fast."

The stakes are lower with peeing. Look, peeing is great. When my son pees on the toilet, it is super great. But pee doesn't suck that much to clean up. It's a light-colored liquid. The scent isn't horrific. And it's sterile! I mean — right? It's sterile, right? Then there's poop. Poop is not easy to clean up. It's like melted tar, under the hot sun. It hold tight to whatever it finds itself on. Its scent is a mixture of hell and vomit and death and decay. And it's NOT AT ALL STERILE. IT IS THE OPPOSITE OF STERILE. What I'm trying to say is that it is super important that our children poop in the toilet. It's why we write impassioned essays on the topic. Why we order storybook after storybook containing characters who conquer the potty. Why we learn jingles about how to go ("wash your hands and be on your way!").

Potty-training is the great equalizer. It reminds moms and dads alike, celebrities and normals, that we are mortal. That we cannot control fate. Anna Faris knows it. Olivia Wilde knows it.

To make matters worse in my house, I swear that right around the time that my son was *supposed* to be potty training (which I have gathered is around 2 years old), my son's poops got more extreme. It was like his body knew that it was time to be pooping into a proper vessel, so it could really go wild. His poops have gotten grittier, softer, and like a hundred times more scented. It's really kind of unbelievable.

"I WANT MORE THAN THREE!" he yells back.

He saddles up to the toilet, takes a seat, grunts a couple times, then announces that he just can't do it. And he'd like his M&M's now.

The best scenario as-of-late is that he calls out to me mid-poop, so I run to him, proud of him for being so in tune with his butt muscles, rip off his half-filled diaper, and throw him on the toilet seat. From there, he might squeeze out an extra turd or he might not, but he does usually manage to get poop all over the seat, due to the fact that some poop was already hanging onto his ass cheeks when I placed him atop it. So once I clean his butt, and spirit away the poopy diaper that was discarded in the middle of the room, I still have a toilet seat to wipe feces off. It's like I am trapped in a labyrinth of poo.

I'm not the only one suffering. If you have any friends going through this at the same time that you are, you know it can consume us, for a period.

If you can get past the mess, potty training is actually hilarious. My child had an accident while wearing YELLOW rain boots yesterday — in the two minutes between taking off one diaper and putting another on, the cheery, waterproof footwear filled up with pee. I mean, it sucked, but it was so poetic.

I know people without kids are weirded out by how happy we are to see our kid take a dump on a toilet. They can't understand. They haven't had their faces stuck inside a diaper for the last couple years, little legs flying in their face and threatening to overturn the entire crapshow. Our main goal now, outside of getting our little ones to poop solely on the porcelain throne, is to get them to do it alone.

I asked Cindy Rosner, a clinical social worker, why we feel so insanely victorious when we get our children to go on the toilet. She laughs heartily, a parent herself, and says, "That's relief that you are feeling!" Because, of course, we do feel relief when our child accomplishes something they are "supposed to do." And it hits on a simple and hard-hitting truth. "We are living vicariously through them," Rosner says. In short, their victories really do feel like our victories — and that is both the beauty and the torment in parenting.

So, to every potty-training parent out there, I salute you.

And for the record, I have found that dishwashing liquid cuts the poop smell faster and more efficiently than any hand soap you have lying around. Good luck. I'll see you on the other side.