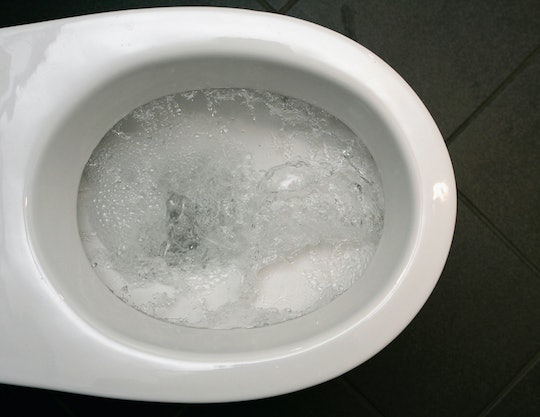 Potty Training My Daughter Was Hell, & I Wouldn't Wish It On My Worst Enemy

By the time our daughter was 2 years old, I thought we had experienced it all: sleep deprivation, vomit and pinkeye, stomach flu, teething, sleep regression and tantrums. But nothing prepared me for the hell that is potty training.

At first, I foolishly thought potty training my daughter would be a snap, since she was showing all the signs of being ready for it. She'd tell us when she had to go or needed to be changed. She'd ask to sit on the toilet when she saw us using it. By December I’d purchased an Elmo toilet that sings and talks when you push the handle, some Pull-Ups, and Disney-themed underwear to prepare for the process. I didn’t have a plan, per se; I figured potty-training would be more of a "wing it and see what happens"-type venture.

In the beginning, my laissez-faire approach to potty-training appeared to work. We sat my daughter on the potty every few minutes and would constantly ask her if she had to go. We’d rush her to the potty when she showed signs of needing to go, and we let her run around without a diaper. She had accidents, but she was beginning to understand that not telling us she had to go was a way to avoid having accidents. It was a good start.

Then I did everything the books told me not to do: I stopped the process and put her back in diapers. If I needed to run an errand or head to a play date, I put her in a Pull-Up, hoping she would understand that it was different than a regular diaper. Way different, right? She never asked to use the potty while we were out, and after two weeks of not seeing any progress I put her back in diapers.

Then I decided to try the method several of my friends had successfully used on their kids: the three-day method, which involves potty-training your kids in the span of a weekend using little more than positive verbal reinforcement and the aid of potty-training coloring books.

I used so many Lysol wipes that weekend and did at least five loads of laundry to wash the pee smell out of her clothes.

I started on a Friday and cleared the entire weekend to focus on potty training, which was way harder than anticipated. You have to be at home for three days, which is tough, as there are only so many crafts that can be made and coloring books to color before you want to toss all the crayons and glue sticks in the trash. To make matters worse, the three-day-method was not working. My daughter wasn’t going when we rushed her to the potty, and she refused to go poop unless she was wearing a Pull-Up. I used so many Lysol wipes that weekend and did at least five loads of laundry to wash the pee smell out of her clothes.

Then on Dec. 15, my water broke after the first weekend of full-on potty training. Any progress I had made with my daughter just vanished. She went back to using Pull-Ups and was not telling us when she needed to go. Now, I had two diapers to change: my newborn's and my daughter's.

A few days into my maternity leave I attempted the three-day method again, then the week-long-method. I followed my daughter around the house with the potty, Lysol wipes strewn everywhere. The potty made its rounds in the playroom, the living room, and the backyard — everywhere she went, the potty went. The majority of the time she was just sitting on it, then when I turned around for two seconds, there would be a puddle on the floor. I wanted to scream "WTF?!?!?" so many times, but I had to stay calm and supportive. I constantly reminded myself that she was not doing it on purpose – she was just learning.

Things got real when the countdown to school began. To avoid a diapering fee, we needed to have her potty trained by June. By March, I had gleaned as much information as I could from potty training websites and implemented them. We cheered when she made it to the toilet on time, we remained calm when she had accidents, and we read her potty-themed books to get her excited about using the toilet. We also gave her incentives for going potty, which was a double-edged sword: at a certain point, she “needed” to go several times a day, because she realized every trip to the potty meant getting stickers or markers.

When we made her use the toilet, she had to hold my hand or be hugged while she pooped. And it was never a half-assed, one-armed hug — it was a bear hug that lasted the duration of the dump, which meant I was looking into the toilet as she dropped a load. My nose was practically in the bowl.

Yet months after our initial attempts, my daughter was still having accidents. So we purchased a princess toilet insert, hid the Pull-Ups, and downloaded a potty chart that required successfully using the toilet for five days to earn a prize. The “prizes” were then upgraded to dolls. My daughter seemed to appreciate that, because she started to get better at getting to the potty in time.

Sometimes, she'd get scared to poop in the toilet, and she'd make me hold her hand or hug her while she pooped. And it was never a half-assed, one-armed hug — it was a bear hug that lasted the duration of the dump, which meant I was looking into the toilet as she dropped a load and my nose was practically in the bowl. It was disgusting, but at least she was going.

By April, my daughter was peeing in the toilet, but she still pooped in a Pull-Up. Whenever she was in a Pull-Up, it was like going back to the beginning of potty training hell. One day, I lost my cool and gave it to her straight. I placed my daughter in her crib, looked her in the eye and told her the reason she was having such horrible blowouts was because it was time to stop using diapers and start using the potty. From this point forward, I told her, she would no longer be wearing any type of diaper, even if she wet her undies. This was it.

And for once, she listened. Of course, she wet the bed that night and had an accident the next day, but she was telling us when she had to go and had more successes than fails. We took her out in public without a diaper and learned to cut off all liquids an hour before bedtime to avoid accidents. Something just clicked inside her brain and she got it. When she started school, she was fully potty-trained.

I’m not sure if being strict with my daughter was the key to potty training or if she just needed a little push in the right direction. Either way, potty training was one of the hardest things I’ve had to do as a parent and I’m dreading potty training my youngest daughter. I wish I could promise I won’t lose it this time around, but I know that would be a lie — especially if she makes me hug her while she's pooping. That part was super gross.