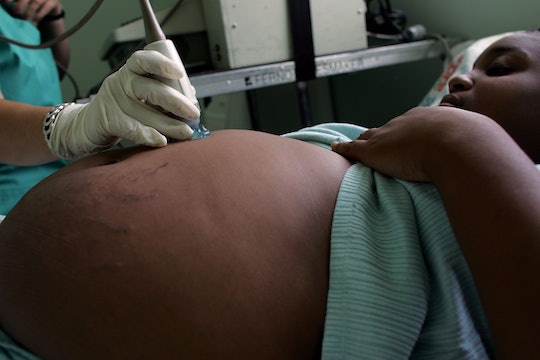 Preeclampsia May Be Linked To Babies' DNA

Preeclampsia has long been considered one of the most complex and least understood conditions of pregnancy. A variety of factors have been associated with an increased risk of developing the condition, from a woman’s age to whether IVF was used. However, without a clear cause, the message has largely been that it can affect any pregnancy. But new findings have put researchers steps closer to being able to predict a woman’s risk of developing preeclampsia. An international study of more than 300,000 children and mothers revealed for the first time that the risk of developing preeclampsia may be linked to babies’ DNA.

The five-year investigation analyzed DNA samples from children in Iceland, Norway, and Finland, and the United Kingdom. Researchers compared genetic information from some 4,380 babies born to women who developed preeclampsia, and 310,238 whose mothers did not develop the condition.

Preeclampsia is a pregnancy-related complication marked by a sudden spike in blood pressure, excess protein in the urine, and swelling in the face and hands. The condition is considered one of the most common in pregnancy, affecting some 5-8 percent of women after their 20th week, according to the Preeclampsia Foundation. However, it can also be a dangerous diagnosis, as patients with preeclampsia are at higher risk of brain injury, seizures, and even stroke during and after pregnancy.

Just what causes preeclampsia has been a puzzle to researchers, however. Prior studies had shown that a woman is more likely to develop preeclampsia if her mother or sisters had it, and that the diagnosis “also runs in the families of men who father preeclamptic pregnancies,” study author Dr. Linda Morgan, of the University of Nottingham in the United Kingdom, told Medical News Today. And according to the Preeclampsia Foundation, prior studies had determined that the placenta plays a key role in the condition.

Studying the formation of the placenta had proven difficult. But the latest research was carried out using a genome-wide association study (GWAS), a new method that scans complete sets of DNA among large groups of participants to find common genetic traits and variants.

“As it is the baby's genes that produce the placenta, we set out to see if we could find a link between the baby's DNA and the condition,” Morgan said. She also said the findings could lead to more ways to help doctors lower the chances that a patient with proven genetic risk could go on to actually develop the condition:

We believe the new insights from this study could form the basis for more effective prevention and treatment of preeclampsia in the future, and improve the outcome of pregnancy for mother and child.

Whether these new findings will lead to new blood DNA screenings in early pregnancy to help predict preeclampsia before the second trimester remains to be seen. For now, the authors plan to focus the next phase of research on replicating their findings in other large populations, according to Medical News Today.