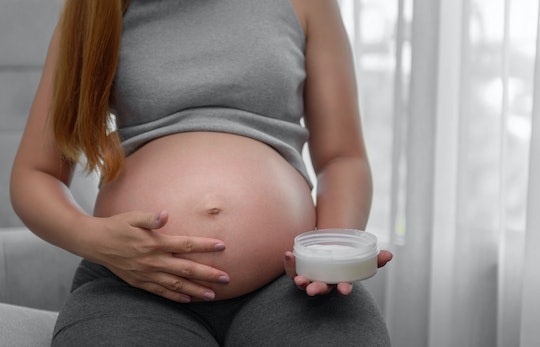 Pregnancy Chafing Is The Literal Worst, But There Are 6 Things You Can Do To Help

Oh the indignities of making a completely new human within your own body. They never end. After you've puked your guts out, farted in a room full of nosy strangers, and sweat so profusely that it puddled, you thought it couldn't get any worse, could it? Au contraire — I assure you it can. In the final stages of my pregnancy, when I was positively blossoming with child, those areas most in bloom liked to rub up against each other like people on an overly crowded Manhattan subway. Fortunately, I found some pregnancy chafing relief that made life just a bit more bearable.

Chafing happens when moist heat is trapped between two or more surfaces on the body, decreasing the ability for the skin to glide easily over one another. The added friction, plus the heat and moisture, irritates and scrapes the skin, noted Healthline. With chafing, the old adage of "an ounce of prevention is worth a pound of cure" holds true, but even the best plans can be derailed in the face of cloying summer heat and body parts that you've never known could even rub together, let alone chafe. For those instances, you're going to be on the defense, working to soothe and heal the angry areas.