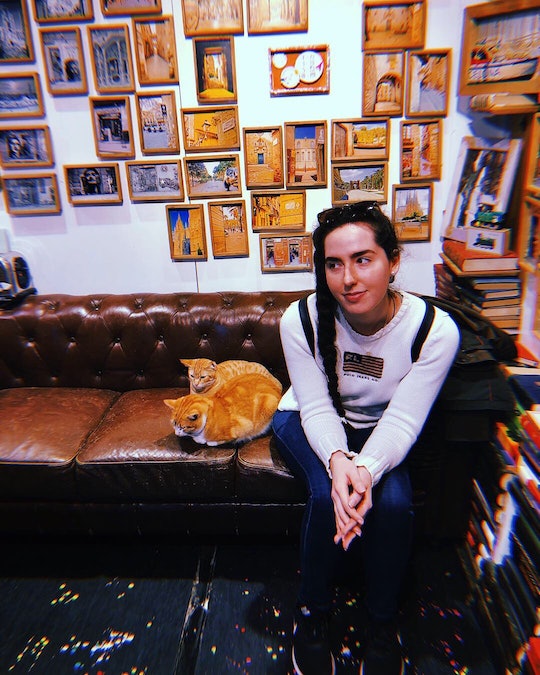 Pregnancy Scares Me, But Being A Mom Doesn’t

To me, the sound of a child’s laugh is nothing short of magical. No, not that shrieking, faux one children sometimes do for attention, but that genuine, truly innocent laugh that seems to only emulate from a child. The one that makes me think:I want kids. Even amidst the crushing burnout of my generation, equally crushing debt, and general malaise of our social-political climate, that laugh can leave me thinking that, yes, I want to have a baby.

And then I think about what usually precedes the laughter: the ever-expanding stomach; the body ready to burst with its own guffaw; the swelling; the pain. And I think: No way. Not a chance.

Recently, Nicole Dennis-Benn wrote an op-ed in The New York Times exploring her desire to be a mom, but without the experience of a laborious pregnancy. Her words resonated with me in a profound way. For most of my life, I’ve never wanted kids. I considered them expensive, troublesome; a weight that would shackle me to decades of responsibility. I’d seen what having children had done to certain women in my life and whose lives I’d only witnessed. I’d watched as foregone dreams, marital disputes, and financial debt all followed these women’s decision to have kids, superseding what at least appeared to be their happy, pre-kid lives. Which is to say nothing of the way the American public treats pregnant women in the workplace, pregnant celebrities, pregnant royalty (hi, Meghan Markle), and post-pregnant bodies — all facing unrealistic expectations, discrimination, and little to no actual, tangible support.

Then, just like Dennis-Benn detailed in her op-ed, I received a medical diagnosis that impacts my reproductive organs. If not treated or managed, I was told, it could lead to infertility. Suddenly, the thought of having a child wasn’t repulsive... it was panicked. What if I do want kids? What if I do want to care for those kicking and screaming balls of chaos?

What if, years from now, what I have always scoffed at turns out to be the very thing I desperately want?

Women had been doing it for thousands of years. Women’s bodies are made for this. But I’m not so sure mine is.

When I shared this fear with a close friend at the time, who was in a relationship and planning to be pregnant the following year, she said it was OK to be afraid; to experience what she considered to be “normal” thoughts, now that I had joined the fold and was seriously considering the possibility of having a child.

But my medical diagnosis has been manageable, and infertility doesn’t appear, for now, to be a future problem. Time has pushed me forward, and I have watched friends get married and announce their pregnancies. My friend had her baby, other people had babies, and in the midst of those announcements the thought of me having a child became, once again, just inconceivable. At what time? With what money? And with whom?

Of course, considering the who, what, when, where, and how of pregnancy and childbirth isn’t new. I would venture to guess almost every would-be parent asks themselves some variation of the questions I continued to ponder.

But I’ve realized, in the wake of my medical diagnosis and the presence of more and more laughing children in my life, that it’s my unease with the pregnant body that I cannot reconcile. Or rather, my unease with my body pregnant. The heaving weight I’d have to bear, day in and day out, for nine months; the process of birth and how it can, literally, rip a woman’s body apart; how women are often mistreated and improperly cared-for during birth; how the pregnant body is dissected, analyzed, and often shamed and judged.

Put myself through that? Why?

Bearing a child yourself shouldn’t need to be a prerequisite for parenthood.

The moms I know tell me I’ll get over it. They promise me that the changes to one's body and the excruciating labor pains are all the “normal” price one has to pay to bring life into the world. My mother believes I could handle it because she did... and four times, no less. Women all around the world do it. Women had been doing it for thousands of years. Women’s bodies are made for this.

But I’m not so sure mine is.

The way a uterus expands to accommodate a child is truly mind-boggling. The way the skin stretches, the hormones go crazy, the way the birth canal contracts and expands during labor. What seems to amaze so many people just makes my skin crawl. Bodies can do so much!

But should they? Should mine?

My thoughts on having children may have evolved, but nothing has been able to erase the shuddering discomfort I feel when I even consider the notion of pregnancy. Not even my desire to eventually have a child.

I know, deep down, that I don’t ever want to be pregnant. Thankfully, I don’t have to be.

Bearing a child yourself shouldn’t need to be a prerequisite for parenthood. Surrogacy or adoption isn’t just for those who can’t get pregnant, or who will experience complications if they do. These options exist for a reason, and those reasons doesn’t always have to be considered “sad” or out of someone’s control.

For some, immense and insurmountable physical sacrifice is the price a person should pay if they want to experience parenthood.

I told my mom about my willingness to consider surrogacy in the future, mentioning, of course, that it’s quite expensive. She immediately asked why. To her, it’s simply exorbitant and unnecessary. Why would I even consider the exponential cost when I can just “do it the old-fashioned way”?

But not everyone who wants to be pregnant wants to do it the old-fashioned way. And to assume so is to assume everyone is in a heteronormative partnership. Clearly, that isn’t true. In fact, people who want children might not be in a partnership at all. And whether you’re single, partnered, cis, straight, gay, non-binary, or any other identity, wanting to have a child and not wanting to be pregnant is just as valid a choice as any other. Surrogacy or adoption are not just fallback options. They’re simply options.

So why should those options — options that are available to me — be demonized just because I am healthy enough to carry a child on my own? Why would I need to suffer from a condition that might complicate a pregnancy in order for these options to be considered valid? Why do I need the absence of choice in order for this choice, surrogacy or adoption, to be accepted?

Unfortunately, I already know the answer. In fact, I heard it years and years ago, during a conversation entertained above my head between my mother and my father. They were discussing a woman who didn’t want to be pregnant. I don’t know if she was a coworker or a celebrity, but the woman in question had said that she wanted to have a child but didn't want to have the child herself, because she didn’t want to deal with the inevitable changes to her body. My father had remarked that her desire to avoid pregnancy was vain — selfish even. She wanted to take care of another life so, to my father (who will never experience a pregnancy), whatever it took to create that life is exactly what a future mother should endure.

For some, immense physical sacrifice is the price a person should pay if they want to experience parenthood.

Carrying a child yourself, entering into an adoption, or using the service of surrogacy are all valid choices, and the decisions leading up to those choices are undoubtably influenced by multiple factors. But feeling shamed, guilted, or judged into pregnancy because “that’s just what women’s bodies do” shouldn’t be one of the factors that eventually results in a child.

And I refuse to let it be a factor in my decision to start a family.