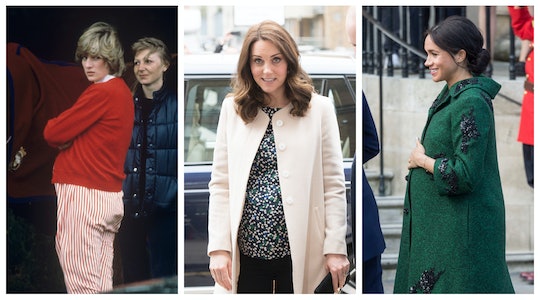 Who Even Owns A Royal Baby?

After I had my second baby, I had to share her with numerous relatives wanting to help "hold" her, when all I wanted to do was snuggle, just the two of us, while someone else went on a toilet paper run to Walmart. I can't imagine sharing my baby with two sets of grandparents *and* the entire British empire, but apparently that's absolutely what is expected of the Duchess of Sussex. With the news that current pregnant person Meghan Markle will reportedly skip the post-baby photo op on the hospital steps, per Vanity Fair's reporting, the media will be looking for an alternate form of access. After all, the public have a right to see their latest monarch... right?

From the start of Meghan's pregnancy, she has been on the receiving end of commentary on how she carries out her royal duties. She has been criticized for putting her own hands on her own pregnant body, has endured the publication of her estranged father's opinions on her pregnancy, and, Slate argues, been used as a diversion from other allegedly unsavory royal rumors. It all sounds so familiar. She knew what she was getting into when she married a prince, right? She knew the duties that came with the title. She knew that The Company was a tax-payer funded enterprise.

And yet how did that story end for the princess who was criticized for her every move and even spoke openly about the horrors of being pregnant in the public eye?

It's no secret that as a whole, society feels ownership over pregnant women and their impending motherhood. From women interrupting your Starbucks run to remind you that caffeine "isn't good for baby" to strangers in Target commenting on the size of your bump — "Whoa! Twins?" — it's everywhere. And naturally, when you're in the public eye, those comments are even more prevalent. The more we see of and know about Meghan’s pregnancy, the more judgement we are able to unleash where we already watch every bite the royals take.

The whole world is watching my stomach.

The... behavior of a pregnant woman?

Look, pregnant women owe us nothing. The royal family owes us nothing. Meghan's baby is 7th in line to the throne. Here in the U.S. we cut ties with the British monarchy in the 18th century — yet we continue to act as though it is our right to be present in the immediate aftermath of Meghan's birth. If we continue to vilify Meghan Markle for daring to conceive and carry a child with a British man, we're going to do serious damage. Her friend George Clooney agrees.

Talking to Australian magazine Who, Clooney said, “She’s a woman who is seven months pregnant and she has been pursued and vilified and chased in the same way that Diana was and it's history repeating itself. We've seen how that ends."

We absolutely have. And Princess Diana — the one we constantly compare both Markle and Kate Middleton to — would be the first to agree that pregnancy in the public eye is more like war. In an article from 2012, when the world was waiting for Prince George to be born, CBC touched on how royal pregnancies have lost all privacy, citing one of Princess Diana's most famous quotes: "The whole world is watching my stomach."

Diana knew how much pressure she was under, and she could literally feel it as she went to events and stood by her husband — the future King of England — all while trying to keep her morning sickness at bay and grow her own child. She started the whole photo-op-outside-the-Lindo-Wing thing to satisfy public desires, and pave an escape route to the castle where she could finally spend time getting to know her babies — in private. The Duchess of Cambridge, mother to the next heir to the throne, carried this tradition on, but there is no reason for her sister-in-law to do so. Truly, polar bears giving birth at the zoo have more privacy.

The world insisted that Kate wasn't showing "the real side" of motherhood, and chastised her for... I don't know? Not coming out in those giant mesh panties with her leaking nipples?

It has to be how Markle feels — and it's safe to assume Kate probably also felt that way. When the Duchess of Cambridge gave birth to her third child, Prince Louis, just last year, the world was quick to judge her photo op on the steps of the Lindo Wing — a throwback to Princess Diana's own fresh-from-delivering-a-baby poses. Having abided by the royal call sheet, the world insisted that Kate wasn't showing "the real side" of motherhood, and chastised her for... I don't know? Not coming out in those giant mesh panties with her leaking nipples leaving pools of breast milk on the London streets? The CEO of Fridababy even got in on the criticism of Kate (of course, without directly saying her name) by penning a full-page ad in the New York Times to Markle that begged her to skip the post-delivery photo op and remember that "You’ll smile, you’ll wave, you’ll be radiant, but between your legs will be a whole different story." You know, as if she didn't already know that. As if stepping out with hair and makeup to smile at the world with your new bundle of joy is some kind of vagina-denying anti-feminist theater.

"I think she’s being portrayed unfairly, and I feel that if people really knew her they would know that she is not only everything we perceive of her in being graceful and dynamic in holding that position, but she just has a wonderful, warm, giving, loving heart,” Oprah Winfrey told CBS This Morning. “I think it’s very unfair.”

Regardless of how anyone describes "real" motherhood, the truth is, it's all real. And Markle touching her stomach during a speech doesn't have to mean that she's taking the spotlight away from the Queen. Markle preferring to be at home with her baby rather than outside a London hospital for those first few days after giving birth doesn't mean she's slighting Kate.

It is no coincidence that the Duke and Duchess of Sussex unveiled their new Instagram account, @sussexroyals, in the waning moments of Meghan's pregnancy (with apologies to the man inconvenienced by this). Whenever the next royal is born, I wish Meghan everything I enjoyed as a new mom: a surplus of baked goods, a healthcare team that believes in her health as much as the 7th-in-line-to-the-throne, and the choice to post a photo when she is ready.

She's a woman who is pregnant, not an evil villain intent on destroying the royal family from the inside with her own spawn. We've seen how this movie ends. And Princess Diana, "The People's Princess," would expect more from all of us.