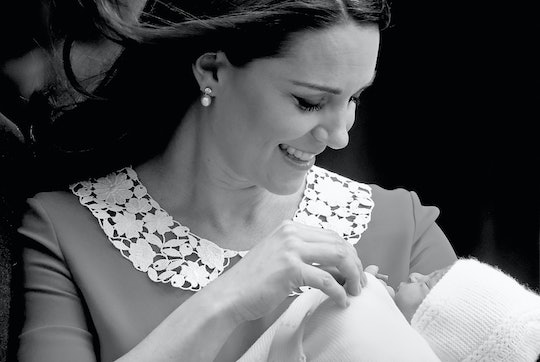 The "Real" Side Of Motherhood Doesn't Have To Be Depressing

Every day, I'm guaranteed to see at least one friend share some Facebook status, complete with a picture of a mom with mascara-streaked tears, that says, "motherhood is hard, I'm tired of trying to show the perfect side of parenting, sometimes I just need a break," and so forth. It's part of the move to normalize the "real" side of motherhood, and it has value. But an unintended consequence of this often gritty realness is cynicism around positive representations of motherhood and parenting.

Take the backlash to the Duchess of Cambridge's photo call on the steps of the Lindo Wing on Monday. Kate Middleton walked out of the hospital seven hours after giving birth looking lovely, and people were furious. "Kate Middleton leaving hospital looking like that is unrealistic AF girls," wrote one person on Twitter. Said another: "Most moms don't look like that, for sure." "A problematic image to be sending women," declared a third.

When I was pregnant with my first child, I frequented a lot of mom-to-be message boards. There was always a post that read something like, "A friend told me she loved being pregnant/being a mother and it was all so wonderful, but I'm really struggling. I just hate being pregnant and I can't stand seeing her perfect posts anymore." The replies were quick and uniform: "She's just lying to make herself feel better." "She's just trying to paint some unrealistic view of pregnancy for her Instagram." "I hate people like that who refuse to see the 'real' side of parenting."

I can't assume to know what these other mothers are reacting to — studies have shown a link between the presence of strangers in a social network with negative self-esteem, per Time, so their feelings of negativity are quite valid — but these ideas around the "real" side of parenting are worth a look.

These moms aren't necessarily pretending that motherhood isn't hard or trying to paint a 'perfect picture.' They're just coping the best way they know how — with positivity.

A mom who shares heartfelt memes about how being a mother is her one true calling is mocked. A mom who packs mascara in her hospital bag is labeled materialistic or silly just for wanting to look and feel nice when she goes home with her brand new baby. She's told, "Trust me, you won't want that when you're bleeding into adult diapers." "I hope you packed nipple cream because that's what you'll really want." "You'll barely be able to keep your eyes open, let alone put makeup on them."

It's tiring and it's exhausting to read, but for the moms who try to keep a positive outlook on parenting — for moms who constantly seem "chipper" and "perfect" in their Instagram posts — it's even more tiresome. Because these moms aren't necessarily pretending that motherhood isn't hard or trying to paint a perfect picture. They're just coping the best way they know how — with positivity.

And positivity can be a great tool, especially during the postpartum phase. The Mayo Clinic has reported that positive thinking not only breeds positive thoughts, but has been proven to lower your levels of depression, lower your levels of distress, improve cardiovascular health, and most importantly, give you better coping skills during hardships and times of stress. The founder of positive psychology, Dr. Martin Seligman, had a theory about depression called "learned helplessness," a mindset stemming from situations where there is a lack of control — like, say, the arrival of a newborn. These moms who focus on the positive aspects of parenting — who believe cuddles and toddler kisses are worthy of Instagram posts — they aren't writing their thoughts down to make you feel bad. They're writing them down to make themselves feel better. Instinctively, they have stumbled onto some of the core techniques in positive psychology to gain a sense of control.

Likewise, the departure of Amanda Cook Tucker, the Duchess' personal hairdresser, from St. Mary's hospital needn't have been viewed as proof of the impossible beauty standards placed on new mothers or of Kate's secret desire to make us all feel crappy. The Duchess' photo opp was widely viewed as mandatory performance of royal duties. Maybe having her hair done also made her feel better about the moment.

"Grooming rituals can be temporary confidence boosters, and studies suggest that the confidence they inspire is itself attractive," wrote Dr. Nancy Etcoff, author of Survival of the Prettiest: The Science of Beauty, in a New York Times op-ed. Looking after yourself, and putting on a chipper face, can be a great way to feel better.

"For [some] moms, keeping up appearances is a coping mechanism and who am I to suggest taking that away? So really the best thing we can do is to ask all moms how they are doing and mean it," Kate Rope, author of Strong As A Mother: How To Stay Healthy, Happy, And (Most Importantly) Sane From Pregnancy To Parenthood, tells Romper.

It's impossible to know who is really struggling out there — certainly, some mothers should seek help for postnatal mood disorders and don't — but shaming moms who don't "look" as if they're struggling isn't the answer. Seeing Kate Middleton wearing a nice dress and heels mere hours after giving birth to a baby doesn't make you any less of a mom, nor does it mean she thinks that's the only way to parent.

I packed my own dress to the labor and delivery ward and I can assure you, it wasn't in an effort to say, "Here's how real moms look when they leave the hospital." It was all part of my own self-care — that dress made me feel good, and if there's any time you deserve to feel good, it's after you've been cut open to release an 8-pound, 7-ounce baby that's now attached to your nipples.

Because it's really OK to feel bad. Motherhood is hard, nobody's denying that. But it should feel just as OK to feel good.