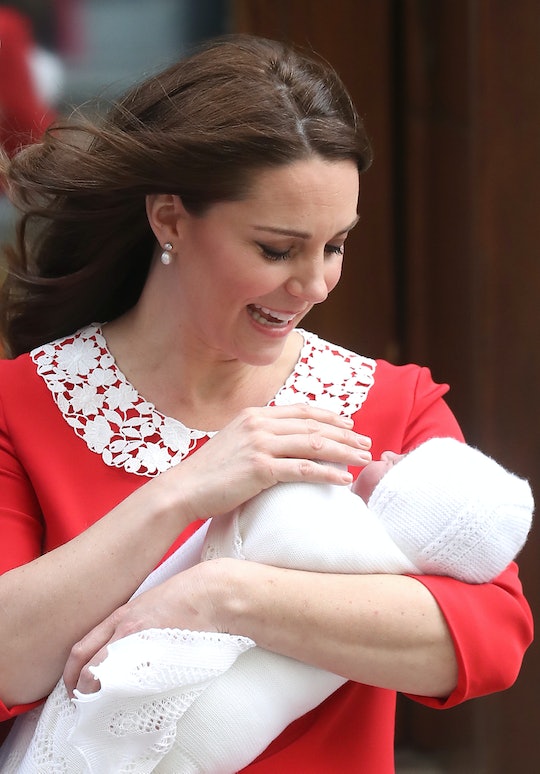 Kate Middleton's Red Dress May Have Been A Tribute To Princess Diana, So Get Your Tissues

Just hours after welcoming her third child into the world, Kate Middleton has already "bounced back." Along with her husband Prince William and their new baby boy, the trio greeted fans from the hospital steps Monday evening — and the dress Kate Middleton wore may have been a tribute to Princess Diana, Prince William's late mother.

When Prince William and Middleton stepped out of the Lindo Wing of St. Mary's Hospital in London, the newly-minted dad of three was wearing the same wrinkled denim blazer and blue pants that he had on when he briefly left the hospital to pick up Prince George and Princess Charlotte earlier in the afternoon. The wrinkly look was fitting, considering the morning he had. However Middleton's post-hospital look was as put together as ever.

Around seven hours after giving birth, the duchess greeted the public looking spectacular. She had her hair blown out, and she was wearing light makeup, earrings, and her engagement ring. However the main thing people were looking at (besides the baby in her arms, of course) was her outfit. Middleton wore a three-quarter sleeve red dress with a white lace collar, paired with beige stilettos. An eagle-eyed royal fan quickly noticed something about this whole scenario that felt very familiar. When Prince Harry, Prince William's younger brother, was born, his mother Princess Diana also wore a red and white ensemble to greet fans.

To introduce Prince Harry to the world, Princess Diana wore a loose red blazer over a white and red striped shirt. The shirt also had a white collar, like Middleton's dress, and Diana paired it with a red ribbon (or is that a cravat?) tied over the collar. So while the outfits are not identical, Middleton wearing such a similar look while introducing her second son (Prince Harry was also Princess Diana's second son) surely makes a statement.

Not to mention, all three of Middleton's babies and both Princess Diana's babies were introduced to the public wrapped in white blankets (and white hats, for those born on slightly chillier days).

And while the comparison to Princess Diana's outfit on the day of Prince Harry's birth is pretty obvious, Middleton's outfit may have been inspired by something else entirely. Her new baby's birthday, April 23, is also St. George's Day, a holiday generally observed in England and by Christians. The holiday celebrates George, the mythical patron saint of England, as explained by The Independent. England's white and red national flag (no, not the blue, white, and red one — that represents the entire United Kingdom) actually features St. George's cross, as noted by the BBC. So, perhaps Middleton chose a red and white dress in anticipation of giving birth around St. George's Day — and it worked out perfectly.

If you're wondering where you can buy Middleton's fabulous frock, sadly it's not available in stores. The dress was custom-designed for the mom of three by British designer Jenny Packham, as reported by The Sun. Packham also created the other two dresses Middleton wore when introducing Prince George and Princess Charlotte to the world. And speaking of those outfits...

When Middleton stepped out with Prince George after his birth in a blue dress, many made the comparison between her and Princess Diana's look on the day Prince William was born. Fans thought Middleton's blue polka-dotted dress was a nod to the green polka-dotted dress Princess Diana wore when she introduced Prince William, as noted by Hello! Magazine.

Even though Middleton and Prince William's three children will never get to meet their late grandmother, it's so beautiful that a little part of Princess Diana was there with them on this momentous day.