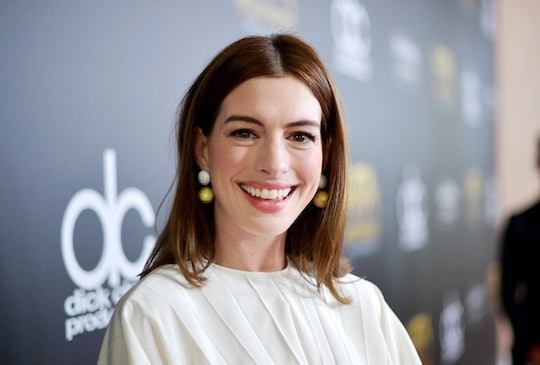 Academy Award winning actress Anne Hathaway always looks fabulous no matter what. So, it's no surprise that she looks incredible while currently pregnant with her second child. I don't know how she does it, but watching pregnant Anne Hathaway twirl in a bump photo is mesmerizing. She looks so amazing, I can't stand it.

Hathaway is currently pregnant and expecting her second child with her husband, Adam Shulman, according to E! News. And until she gives birth, Hathaway is getting to work. The actress is currently promoting her newest project, the Amazon Prime series, Modern Love, which premieres on Oct. 18, according to Oprah Magazine, and she is looking great while doing so. On Friday, Oct. 11, Hathaway stopped by Live! With Ryan and Kelly to talk about her pregnancy and promote the new series, according to People, but what viewers were really paying attention to was how incredible she looked.

She took to Instagram shortly after appearing on the show to show off her dressed up bump. In the photo, Hathaway shines in a peach dress with a full skirt, and some seriously impressive high heels. "This is the fanciest dress I have every twirled in," Hathaway wrote in the caption of the photo.

She's got that right. She looks amazing and that smile on her face says it all. She is glowing throughout this pregnancy.

Hathaway is reportedly a mere weeks away from giving birth, according to People, but she refused to say anything about her baby's sex or due date during her appearance on Live! With Kelly and Ryan. During the show, Hathaway told the hosts that she and her husband do know what they're having but aren't saying a thing, according to People. She's even having fun messing with people when they ask about her baby's name. Instead of giving them the real answer or redirecting the question, Hathaway said that she's been giving them a false name, according to People. "It's really cruel, I enjoy it so much," she said.

"Everyone's so sincere about it and happy for you and being nice to you and all those things, so I like to twist that," she added.

You can't blame her for wanting to have just a little bit of fun this pregnancy, especially since she has been laying low for the majority of it. Hathaway announced her second pregnancy in a super subtle way in late July — with a black and white selfie, taken in a mirror, and posted to Instagram, according to E! News. "It's not for a movie...," Hathaway captioned the shot. And in the months since then, she hasn't posted any new bump shots to her Instagram account.

Hathaway and Shulman are already parents to their 3-year-old son, Johnathan, according to TODAY, but prior experience hasn't made this pregnancy any easier. She told Extra on Thursday, Oct. 10, that she feels different every single day during this pregnancy. "Kid feels great today, so I feel well. Today's a good day," she said. "Some days you wake up and you're like, 'Really? That's my face?' You kind of feel carved from butter."

Those feelings during pregnancy can be so unpredictable. One day you look and feel your best, the next day you can't even recognize your own reflection in the mirror. But, it seems as if Hathaway was feeling her best on Friday, because was glowing in her peach dress. It's easy to see why — she is possibly just weeks away from meeting her newest addition.