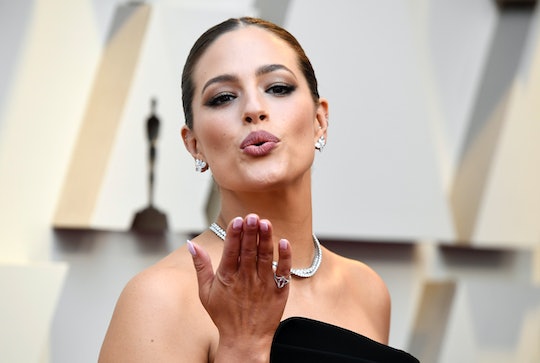 I don't know about you, but I tend to be of two minds when it comes to celebrities who wait to announce their pregnancies. Although it's their personal choice regarding when or if to announce, it's nice when celebs announce a little later in the game because fans don't have to wait around for all of those great bump moments. Like this one of pregnant Ashley Graham rocking her bump and leopard maternity dress. I love her pregnancy already, and it hasn't even been a full month since her announcement.

The model and her husband of nine years, Justin Ervin, surprised fans on Aug. 14 when they took to Instagram to share a sweet anniversary video that turned into something else entirely a pregnancy announcement. Graham shared a video of the couple smiling before zooming out to show her pregnant belly with the caption, "Nine years ago today, I married the love of my life. It has been the best journey with my favorite person in the world!"

She continued, "Today, we are feeling so blessed, grateful and excited to celebrate with our GROWING FAMILY! Happy anniversary, @mrjustinervin Life is about to get even better."

In the few short weeks since Graham's announcement, she has been gifting fans with amazing posts of herself enjoying her very first pregnancy. From hanging out on the beach in a bikini to taking an afternoon nap (which has apparently become "a new non-negotiable" for her, FYI), this mama-to-be is soaking up every second of her new journey.

Most recently, however, it seems as though Graham's energy level might be up. Way, way up, in fact. Because on TK she shared a video of herself dancing in a Ganni leopard mini dress to Instagram. Why? As she captioned the video, "Just a mirror mood."

Fans loved the short video of the newly pregnant model living her best life, even if it was in an elevator. Fellow model Emily Ratajkowski wrote on her Instagram page:

How did you get even cuter preggo? Like how is it possible I don’t understand.

Other fans agreed that Graham looks incredible, with one fan writing, "I wanna look like this when I'm preggers."

I mean... obviously agreed all around.

Now if you're worried that the supermodel is going super glam throughout her entire pregnancy, you must not be one of her nine million followers on social media. Ashley Graham is all about being a body positive advocate, as she so clearly displayed when she shared this nude photo of herself, stretch marks and all.

I think Ashley Graham is going to give us a pretty amazing snapshot of the many sides of pregnancy in the months that she has left before she welcomes her baby. Because pregnancy, as so many of us already know, is not always about being glamorous or playful or tired or "real" or whatever every single day of the week. It's about being all of those things and more, taking each day as it comes.

And if Ashley Graham feels like rocking out in an elevator while clad in a leopard mini dress, why not?