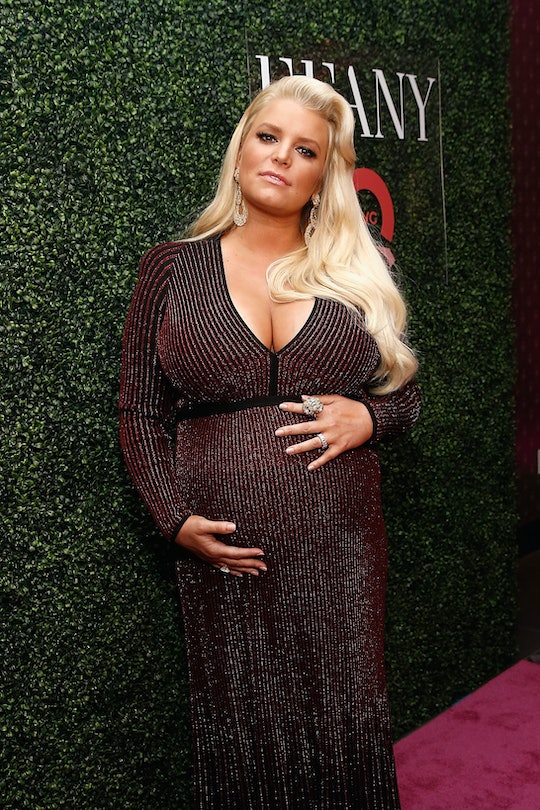 Jessica Simpson Is Struggling With This Really Uncomfortable Pregnancy Side Effect

Presumably, there are some people who are able to get pregnant and find the whole experience magical and lovely 24/7. And then, well, there's the rest of us. As exciting as it might be to grow a new human, the reality of pregnancy is that it's often just plain uncomfortable, and as soon to be mom-of-three Jessica Simpson can attest, it only gets worse in the third trimester. On Thursday, pregnant Jessica Simpson asked fellow moms for help regarding her swollen feet, and in doing so, she posted a photo to Instagram that proved just how awful a situation she was really experiencing.

Unfortunately, it seems like it may just be an unfortunate, but normal, side effect of having a baby on the way. After posting the photo of her foot with the caption, "Any remedies?! Help!!!!," her followers left lots of comments to offer up their support. The general consensus seemed to be that Simpson's photo looked truly awful, and that having extremely swollen feet during pregnancy was basically the worst.

Many of Simpson's followers wrote that they, too, had suffered, and the most common recommendation seemed to be that Simpson should at least try her best to keep her feet elevated as much as possible, and to drink lots of water to stay adequately hydrated.

"That’s was me the last 3 months of pregnancy. Omg sorry!! I took a lot of baths and elevated them!" one fellow mom commented.

For the most part, that seems like really good advice. Swelling in the feet and ankles, after all, *is* common during pregnancy, and according to the Mayo Clinic, it's usually just related to the fact that people generally retain fluid while pregnant. Standing for long periods of time, or wearing tight clothing or footwear that could impair blood flow, can make the swelling worse, while things like elevating the legs, wearing compression stockings, going for regular walks, or even being sure to sleep on the left side — to allow for optimal blood flow — can help ease the misery.

There are some instances though in which swollen feet like Simpson's could suggest a more serious issue. Significant, sudden, painful swelling, or swelling that occurs more in one leg than the other, could be a sign of a possible blood clot, according to Today's Parent, which would need medical attention ASAP.

Sudden swelling may also be a symptom of a potentially-serious pregnancy complication called preeclampsia, according to WebMD, so as some of Simpson's followers have already pointed out, the star may want to double check with her doctor to ensure her blood pressure and urine protein levels are within normal ranges, just in case.

One fellow celeb mama Simpson may want to reach out for for words of wisdom? Kim Kardashian, who was diagnosed with preeclampsia during her first pregnancy with daughter, North, and who had once similarly shared photos of her own swollen pregnancy feet.

In 2013, Kardashian posted a pic on Instagram of the imprint left on her foot by her Givenchy heels, and though she may not have realized it at the time, it could have been a clue that her delivery was going to be complicated (North was delivered six weeks early due to Kardashian's preeclampsia).

Unfortunately, the reality star didn't fare much better the second time around, either: when she was pregnant again with son, Saint, in 2015, Kardashian revealed in one episode of Keeping Up With The Kardashians that the swelling in her feet and ankles had her doctor worried that "it's the preeclampsia coming back," according to E! News.

For Simpson's sake though, hopefully her uncomfortably swollen feet are simply an example of run-of-the-mill pregnancy edema, and that taking a bit of a break and putting her feet up can help them return mostly back to normal. And either way, the pregnant fashion mogul can take heart knowing that her social media followers are always there for support regardless.